GRNews
GreekReporter.comGreecePutin's Athos: A Man's Holy World Where No Women Are Allowed

Putin's Athos: A Man's Holy World Where No Women Are Allowed [Pics] 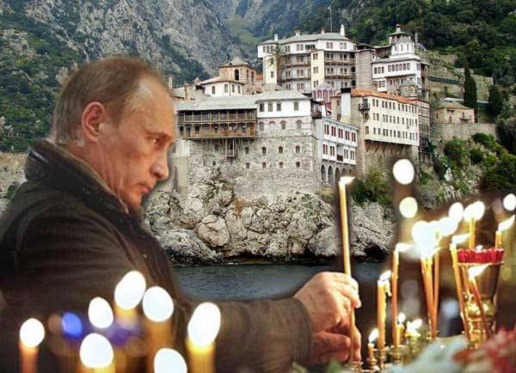 Russian President Vladimir Putin’s visit to Greece will offer numerous economic benefits, however for Putin, the highlight is his visit to Mount Athos, on Saturday. Mount Athos, in northern Greece, is renowned for its outstanding natural beauty. The World Heritage Site and autonomous polity within Greece is an Autonomous Monastic State of the Holy Mountain and flies its own flag.
Putin will visit Saint Panteleimon Monastery, one of the 20 monasteries located on the third peninsula of Chalkidiki. The Russian President had visited the Monastery in 2005 when he tasted the wine and decided that this would be served at the Kremlin from then on. The monastery that Putin will be staying on his visit is known as the “Russian Monastery” due to the nationality of its monks. The first Russian monks began to come in 1840, however its population peaked with 1,000 monks towards the end of the 19th century. This year, marks the millenium of the St. Panteleimon Monasteryn whose monks first settled there in 1016. The Russian monastery’s complex was sponsored by Russian Czars, and that is why there was a decline after the rise of communism. Putin’s ascent to power, however, has changed all that and the monastery is once again enjoying a glorious revival following the renovation of most of its buildings.

The buildings have distinctly Russian architecture. There are imposing interiors and religious paintings from the 19th century covering the walls.
Other facts about Mount Athos: The cluster of monasteries are also known as the Orchard of the Virgin Mary due to their dedication to the Virgin Mary, but women are strictly barred from entering. They have been forbidden access for more than a thousand years. The monks believe that women would offer fleshy temptations to the monks. The prohibition of women is called Avaton. The ban was officially proclaimed by Byzantine Emperor Constantine Monomachos in 1046. In the 14th century, Serbian Emperor Dusan the Mighty brought his wife Helena of Bulgaria here to protect her from the plague, however it is said that she didn’t touch the ground throughout her entire stay. Other rumored breaches include one by refugees fleeing Nazi occupation forces, and a woman dressed as a man was caught shortly after World War II. The penalty is a maximum 12-month jail sentence. Greek human rights groups have failed to have the ban overturned in court.
French writer Maryse Choisy wrote a book about her time at Mt. Athos in 1920 when she entered disguised as a sailor. The European Parliament had requested a lifting of the ban on the grounds of gender equality but it remains firmly fixed.
2,000 monks live in the 20 monasteries of Athos, isolated from the rest of the world. It is the oldest surviving monastic community that dates more than 1,000 years. Mount Athos was sanctioned by Virgin Mary. It is said that she sailed past the area, accompanied by St. John the Evangelis when their ship was blown off course. Overwhelmed by the beauty of this land she blessed the region. This, however, did not stop the monks from banning women. Hermits live in special cells (kelion), secluded from the world, some of them for decades at a time in an effort to make a connection with the divine. Over the centuries, the monasteries have amassed unique works of art thanks to donations by emperors and czars. The skulls at the small monastery at Skete Prophet Elias have inscriptions scrawled on their foreheads as a type of posthumous inventory system. Monks are buried for three years before the graves are opened and bones transferred to a common burial chamber, except for the skulls. Entry is forbidden for women and takes place by ferry boat. Before embarking pilgrims must have been issued a diamoneterion, a form of Byzantine visa. Laymen can either stay overnight or for several days, and each visa only allows access to one monastery.