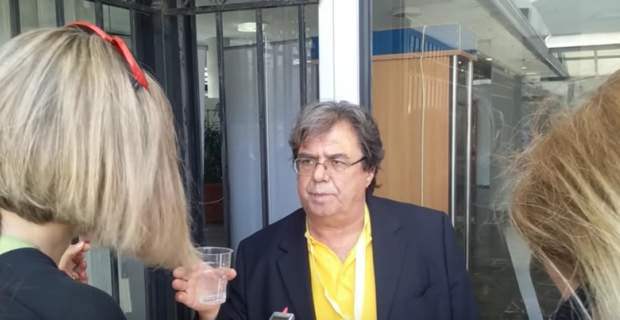 Aristotle’s tomb was almost “buried” by politicians in Greece who wanted to create a gold mine in the area where the 2400 year-old monument was found, says Dr. Sismanidis.
Kostas Sismanidis, the archaeologist who believes he has discovered Aristotle’s tomb, says in a video that political intervention stopped excavations in the 1990s.
The archaeologist claimed in an interview that although excavations in the Stagira area had started in 1990, they were stopped abruptly when top ranking politicians intervened in the late 1990s.
When asked why the excavations stopped, Sismanidis answered that his political superiors stopped the project because they wanted to give permission for a goldmine in the area and they didn’t want a significant archaeological discovery to get in the way.
Sismanidis names Evangelos Venizelos, who served as minister of culture from 1996 to 1999, Lina Mendoni, who in the 1994-1999 period was special advisor to the ministry of environment and public works and then became secretary general in the ministry of culture until 2014, and deputy finance minister in the 1996-2004 period, Christos Pachtas.
Specifically, Sismanidis was referring to TVX Hellas goldmine that was operating in the area, only two kilometers from Stagira. TVX Hellas went bankrupt in 2003 and all its assets passed to the state, which at the time was represented by Pachtas.
In December 2003, Pachtas was involved in the scandal of the sale of the Chalkidiki gold mine to Hellas Gold, a subsidiary of Canadian-based Eldorado Gold. After the scandal, the politician was forced to resign in 2004.
Watch the video below where Sismanidis explains how interests almost ‘buried’ the newly found monument.