The Battle of Crete Remembered at 75th Anniversary in Chania 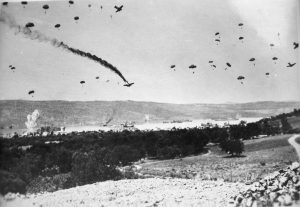 Yesterday evening against the backdrop of the historical Maleme Airport in Crete, the commemorative ceremony for the 75th anniversary of the Battle of Crete commenced.
There were many representatives from the countries of Greece, Germany, the United Kingdom, Australia and New Zealand in attendance. The ceremony was narrated by the mayor of Platania, deputy prefect Apostolos Voulgarakis and the Mayor of Chania, Tasos Vamvoukas.
Following the memorial services there was also a wreath laying and a presentation of the 3rd trophy of the Battle of Crete, received by 33 men and women of the armed forces who made the difficult three day trek in full gear from Heracleon, Rethymnon and Chania to attend the ceremony. Also following the awards presentation, there was an aircraft display of a F16, of the 115 combat wing based in Chania, from the team “Zeus.” A parachute display was planned but had to be canceled due to high winds.
During a brief address by the State Undersecretary Terrence Kouik, the sentiments of the events to take place was noted as he remarked that, “everyone together now we celebrate the power of solidarity and togetherness, the power of freedom and determination and above all the friendship of brother peoples, especially in these ambiguous and stormy days, not only our country but the whole planet.”