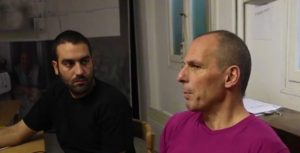 New independent AthensLive , the crowdfunded and alternative media outlet, scored its first large scoop in a guerrilla interview with former Finance Minister Yanis Varoufakis. In his talk, he commented on some of his experiences with the leadership of the Radical Left Coalition (SYRIZA) government — Prime minister Alexis Tsipras, Vice-President Giannis Dragasakis, and current Finance Minister Euclid Tsakalotos — as well as key players in negotiations with Greece, including ECB Chief Mario Draghi, IMF Chief Christine Lagarde, Germany’s chancellor Angela Merkel and German Finance Minister Wolfgang Schauble.
On Grexit
“There wasn’t a chance to exit the euro.  It was all bark and no bite, non-credible threats. It would cost them a trillion — really. 320 bln (euros) — that’s what we owe them — spare change. 115 bln through TARGET2 of the European Banking System. 210 billion in banks’ debts if you add up all these papers that he banks keep recycling. On top of that, add the private debt of Greek enterprises towards foreign ones. Finally, add the non-performing loans to Deutsche Bank and the sum is more than a trillion. Also, bear in mind that these are the ones we know about.”
SYRIZA’s negotiation strategy in the early days
“What were they trying to do to lead us into today’s asphyxia? A bank run. So, as Finance Minister you can’t say something that will make people withdraw their money. Because that’s what Draghi was waiting for to shut the banks down. So I couldn’t discuss Grexit. I was saying that such a scenario is out of the question and that there’s no reason to worry. There is no need to worry. That we will not back down and if someone is to make any threats let it be them. …  Our deal with Tsipras was that behind closed doors, we would threaten them. Which I did and that’s why I wasn’t their favorite. There was no reason to go out to the people and say something like that. You only do that if you want Grexit to happen. Because the minute you say it, it happens, as the banks close down, etc.”
On the EU strategy
“I wanted for us (Tsipras) to be together until the last minute. If they threatened to close our banks, like they did, to cut their bonds that they have. The strategy of the ECB with QE would have fallen apart entirely.
On Draghi
“It was a very important moment. Draghi took me aside and said, ‘Please, I’m begging you, don’t talk again of the bonds and the S&P program…You’re making my life impossible with that kind of talk. ‘I said, ‘Mario, I won’t talk or even think about this again, but you will not close our banks.’ Dragasakis went a month later in Frankfurt and said… “Don’t listen to Varoufakis, I will veto him.”
For the full interview, here is Part 1: