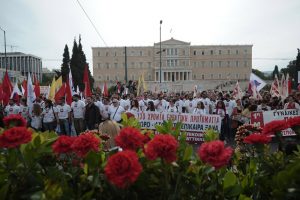 The left-led SYRIZA government is rushing through a new wave of austerity measures ahead of a crunch Eurogroup meeting of eurozone creditors in Brussels on Monday. Thousands of Greek protestors took to the streets ahead of a vote in Greek Parliament on controversial pension and tax reforms demanded by the European Union and International Monetary Fund.
The reforms are being hurried through so that Greece can unlock the next loan tranche worth 5 billion euros from a third rescue package worth 86 billion euros that was agreed to last summer. Greece’s creditors now want more austerity measures in the fear that Greece may miss its budget targets.
Protest rallies
Thousands of workers gathered at protest demonstrations linked to celebrations for International Workers Day (May 1 public holiday) that coincided with the Greek Orthodox Easter. Extra police officers were posted at areas where rallies took place with the closure of access roads and the unprecedented closure of the National Gardens of Athens.
Rallies took place from early in the morning in cities around Greece with the main one at Syntagma Square, just outside Greek Parliament. Workers were called to take to the streets by the General Confederation of Greek Workers (GSEE), the Popular Unity Party, the Athens Bar Association, the Greek Journalists Union, the Panhellenic Seamen’s Federation and other leftist groups. The Civil Servants Confederation ADEDY scheduled its protest concert outside Parliament at 6 p.m. on Saturday, whereas the All Workers Militant Front (PAME) called on its members to gather at Omonia, old Parliament and the Columns of Olympian Zeus.
In Thessaloniki, the All Workers Militant Front (PAME) marched down the Egnatia Highway to the Ministry of Macedonia-Thrace.
Strike action around the country
After years of austerity, unionists of the Confederation of Greek Workers (GSEE) say that the new round of austerity-induced measures are a “nail in the coffin” for Greeks. Strike action ground the public transport system to a halt with the start of 48-hour action on Friday. Travelers were stranded as a result of the Panhellenic Seaman’s Federation (PNO) that announced strike action from Friday, May 6, through to 6 a.m. on Tuesday, May 10.
On Sunday, the Panhellenic Association of Petrol Station Owners started a 24-hour strike at gas stations around the country. An ongoing media strike will continue until Monday, May 9.
Unions threaten Greek lawmakers with expulsion
Athens Medical Association President George Patoulis on Sunday threatened to expel any MP who votes for the social security bill. There are currently 12 lawmakers in Greek Parliament who are members of the association and their future, should they vote in favor of the bill, will be the topic of discussion at a meeting on Thursday. Following suit, the Panhellenic Pharmaceutical Association (PFS) also amplified pressure with threats that deputies that vote in favor of the bill would be expelled.
The stands of the AMA and PFS follow a decision by the Technical Chamber of Greece (TEE) that warned that there would be penalties faced by members of their union who, as lawmakers, support the bill. High-flying MPs who are members of the union of engineers include SYRIZA Prime Minister Alexis Tsipras, State Minister Alekos Flambouraris and Alternate Infrastructure, Transport and Networks Minister Christos Spirtzis.
On its part, the Journalists Union (ESIEA) did not proceed with expulsion of MPs from its union, however an open letter was sent to its twelve members in Greek Parliament calling on them to vote against the social security bill.
Attacks against offices
A group of 15 assailants attacked officers of the riot police outside the offices of the opposition socialist PASOK party, throwing five Molotov cocktails in their direction, at noon on Sunday.
In another attack, unknown assailants broke into the leftist SYRIZA ruling party’s offices at Kalamaria, Thessaloniki, causing damage to property. The attack took place at 3.40 a.m. with perpetrators staging a break-in to throw anti-austerity publications. In an announcement, the Kalamaria branch of SYRIZA announced that the “target of the attack wasn’t just SYRIZA but democracy itself and its institutions.”
In another announcement, SYRIZA condemned the symbolic occupation of its central Koumoundourou Street offices in Athens by uniformed officers protesting social security and pension reforms. “The presence of police forces in the offices of a leftist party alludes to other times that democracy has been left behind,” stated an announcement. “We are waiting on union federations to categorically condemn this action.”