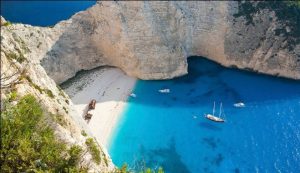 The breathtakingly-beautiful Navagio (Shipwreck) Bay on the Ionian island of Zakynthos has suffered from deterioration and decay over the last 36 years. Work to preserve the “monumental debris” that has spearheaded tourism to the region has begun so that future generations can enjoy the exquisite beauty of the wreckage.
The Municipality of Zakynthos, in collaboration with a local technical education institution, are planning to start restoration work on the freight-liner MV Panagiotis that ran aground in the waters off the shore of what was then known as the bay of St. George.
Zakynthos Mayor Pavlos Kolokotsas says that this “symbol” of Greece cannot be left to ruin, whereas Zakynthos Municipality Tourism Committee Vice Chairman Antonis Nikoloudakis said that discreet fencing will surround the wreck to restrict the entry of crowds without, however, detracting from its beauty. A lifeguard will also be stationed at the beach for the first time.
Signage will be constructed to give greater insight into the history of the wreck that many mistakenly believe belonged to a ship smuggling contraband, cigarettes, wine, and women. Captain Charalambos Kompothekras-Kotsoris, however, recently came out with the real story of how his ship ran into disaster due to bad weather conditions and mechanical failure on October 2, 1980, while traveling from the isle of Kefalonia to Albania.
At the time, locals considered the ship an environmental disaster, but later saw it as a blessing as travelers from around the world rushed to the white sandy beach surrounded by limestone cliffs.