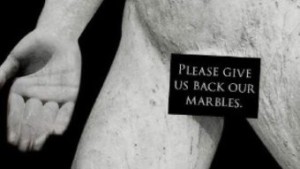 A Picture Says a Thousand Words

The campaign to return the Parthenon Marbles to Greece is using a billboard to help spread the message. The #ReturnTheMarbles campaign has placed a provocative billboard with a strategically placed message just a few hundred meters from the British Museum in London, where the infamous sculptures have resided for centuries after Lord Elgin removed them from Greece.

The #ReturnTheMarbles campaign’s latest ad is backed by the South Australian-based Foundation for Hellenic Studies. Also, among the campaigners are South Australian Treasurer Tom Koutsantonis and State Independent Senator Nick Xenophon, both of Greek heritage.

When speaking of the statues, Mr Koutsantonis stated that, “they deserve to be back at the Parthenon which is a great temple, not just to Greek gods but to democracy itself.”

According to Koutsantonis, the rectification of removing the statues by Lord Elgin centuries ago is long overdue and the statues must be returned to Greece.

This is not the first time that Koutsantonis has stood up and spoken out for Greek issues and feels that his support in no way puts him at odds with his role as an Australian parliamentarian, rather it helps to better the world in which we live.

Along with Koutsantonis, pushing to convey the #ReturnTheMarbles message is fellow South Australian Bill Muirhead, who designed the latest ad. Formerly an advertising agency partner, Muirhead is now South Australia’s agent-general in the United Kingdom and Europe.

A fundraising dinner in Adelaide on Friday night for the #ReturnTheMarbles campaign will be hosted by prominent QC Geoffrey Robertson.