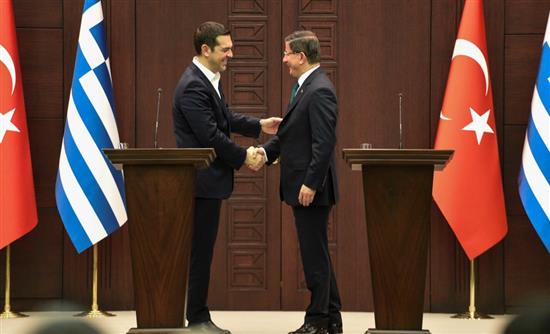 Turkish Prime Minister Ahmet Davutoğlu sought to ease the concerns of his counterpart in Greece, Prime Minister Alexis Tsipras, over the outcome of the upcoming EU-Turkey summit in a telephone conversation the two leaders had the other day.
Mr. Davutoğlu assured Mr. Tsipras that the outcome of the summit will be a positive one and stressed the importance of international cooperation over the migration problem.
According to media sources, Mr. Tsipras told the Turkish PM that there cannot be a bilateral cooperation between the two countries when more than 1500 migrants enter Greece from Turkey on a daily basis.
In response, Mr. Davutoğlu told Mr. Tsipras not to worry as there will be a solution to the problem after the Brussels summit.
It is unclear what that solution might be as Turkey has failed so far to crack down on human trafficking.
Indeed, it is more than clear that Turkey has no interest in keeping millions of refugees and migrants inside its own borders and it is actually encouraging their movement to Greece by any means necessary.
Furthermore, Turkish officials have stressed that the upcoming summit must not focus exclusively on the migration problem but includes talks about Turkey’s membership in the European Union.

One hundred and thirty-two years ago, in October of 1888, Athens' iconic Zappeion Megaron first opened its doors to the public.
Greece