World Cancer Day: The Greek Who Developed the Pap Smear 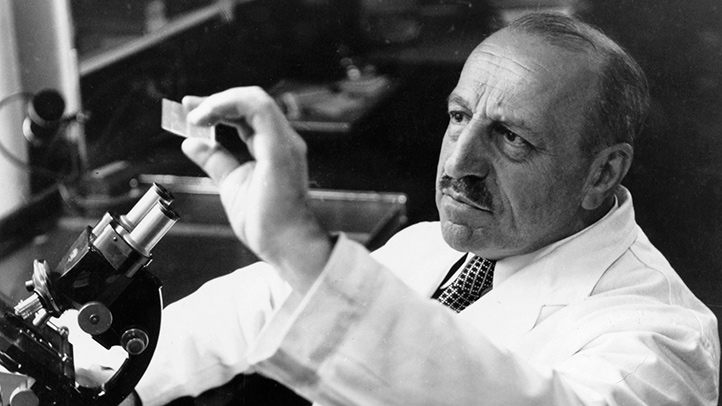 Today is World Cancer Day, a global event dedicated in the fight against cancer, that aims at raising awareness and education about teh disease, and encouraging people across the world to take action against cancer.

One of the pioneers in the field of cancer research was Dr. George Papanicolaou, inventor of the Pap Smear test for cervical cancer.

Dr. Papanicolaou (known as Dr. Pap) joined Cornell University Medical College’s Department of Anatomy in 1914. At that time, Charles Stockard, the chairmen of the Department of Anatomy, was conducting various studies using guinea pigs. Dr. Pap assisted Dr. Stockard with his research as well as conducting his own studies on the sex cycle of guinea pigs. He discovered that he could make cytological examinations of vaginal smears of the animals to study their sex cycle. His first publication, based on this research at Cornell University Medical College, on “Sex Determination and Sex Control in Guinea Pigs” was published in Science in 1915.

In 1920, he began to use his technique of examining vaginal smears under the microscope to study human vaginal cytology. His wife Mary was his first and long term, human subject. Along with smears samples from Mary, he studied pathological cases at the Cornell Clinic, a dispensary operated by Cornell University Medical College. In 1925, he began a joint study with the Woman’s Hospital of the City of New York and Cornell University Medical College’s Department of Anatomy. Funding was found for the study from the Committee on Problems of Sex of the National Research Council and Maternal Health Committee. He studied the vaginal cytologic changes of ovarian and uterine physiology. Initially, he examined samples from twelve women that worked at the hospital and later collected samples from surgical and pregnant patients. In 1925, he published his article on his research, “The Diagnosis of Early Human Pregnancy by the Vaginal Smear Method.”

In addition, he collected pathological smears including some that were from patients with cancer. Through his examinations, he was able to detect cancerous cells. In 1928, he presented a paper on “New Cancer Diagnosis,” at the Third Race Betterment Conference in Battle Creek, MI, where he presented his ideas of using vaginal smears to detect uterine cancer. The article was later published in the New York World. He continued collecting smears of cancer patients as well as cases of abnormal conditions such as inflammatory conditions of the vagina, uterus, and tubes, ovarian cysts, and benign and malignant tumors.

Unfortunately, there was very little enthusiasm by the pathologists and others in the field at this time in his cancer research and Dr. Pap became discouraged. Instead, for the next ten years, Dr. Pap focused on conducting pioneer human endocrinology studies with Dr. Ephraim Shorr and others. They studied problems with menopausal and infertile women by examining the cells through his vaginal smear samples.

When Dr. Joseph Hinsey became the chairman of the Department of Anatomy in 1939, he was interested in Dr. Papanicolaou’s cancer research and encouraged him to pursue it full time. Dr. Papanicolaou joined forces with the Department of Ob/Gyn under the leadership of Dr. Henricus Stander. Dr. Herbert Traut, a gynecological pathologist, and later Dr. Anthony Marchetti from the Ob/Gyn Department, became collaborators in his research. Women admitted to the gynecological service at New York Hospital were given routine vaginal smears (Later called the Pap Smear). Some patients in the early stages of uterine cancer were diagnosed using the smear samples. In the 1940s, his research received funding from the Commonwealth Fund. In 1943, Drs. Trout and Papanicolaou’s classic book “Diagnosis of Uterine Cancer by the Vaginal Smear” was published.

Two years later, the American Cancer Society was established, and this new organization pushed to educate the profession about the Pap Smear Test. In 1946, his paper for JAMA on “Diagnostic Value of Exfoliative Cells from Cancerous Tissues” was well received. Other scientists began to study his smear technique to confirm its usefulness as a diagnosis tool, and some hospitals began using the Pap Smear to detect cervical cancer.

In the mid 1940s, Drs. Hinsey and Papanicolaou began focusing on training pathologists and cytologists on the using Dr. Papanicolaou’s cytological techniques. In 1947, Dr. Pap taught the first course in cytology at Cornell University Medical College. Prior to that time, he trained interested people in his laboratory. This course was held for several years. In 1948, the First National Cytology Conference in Boston was held. The conference members felt that although there was a value in using the Pap Smear Test, they did not feel an extensive campaign should be made until more pathologists accepted the test and were trained to conduct it. Training people on how to the read the smears was important in making accurate diagnoses.

His cytopathologic test was used not only for detecting uterine or cervical cancer, but also use for detecting cancer in the vagina, endometrium, and fallopian tubes. Examinations of urine, sputum, gastric washings, ascites, prostate secretions, spinal fluid, breast secretions, pleural and peritoneal fluids, washings of the nose and sinuses, and aspirations of cystic tumors and lesions could be studied using his method. The technique has also been used for studies on sterility, menstrual cycle, amenorrhea, and hormone therapy.

In the 1940s, when the Pap Smear was first introduced, cervical cancer was the number one killer of women. The Pap Smear, now a standard cancer screening test for all women, has greatly reduced the death rate for cervical cancer patients worldwide.

*Elizabeth M. Shepard is an associate archivist at Cornell University.