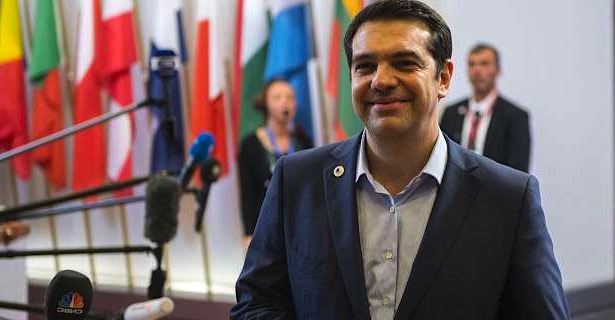 Ever since the outbreak of the Greek debt crisis and the subsequent bailout programs that followed (the first one in May 2010 by the Papandreou government and the second one in June 2012 under the Samara’s government), numerous analysts and pundits have argued that the two respective governments surrendered to the demands of the international creditors without a fight.
While in opposition, the Coalition of the Radical Left (Syriza) used the unquestionable surrender of the Pasok and New Democracy governments, respectively, to the outrageous demands of the so-called troika of the European Commission, the International Monetary Fund, and the European Central Bank for the bailing out of Greece in order to score politico-ideological points and to enhance its image as a viable alternative political force bent on defending Greek national interests and standing up for the dignity of its people.
Subsequently, it made vows to the Greek people that, upon coming to power, it would shred to pieces the Memorandum of Agreement with Greece’s international creditors (on other occasions, pending on where the political pendulum swung, the rhetoric shifted to a call for renegotiations of the bailout terms) and kick the troika out of Greece. In due time, it also went on to announce a rather moderate economic plan (“The Thessaloniki program”) for ending austerity and restarting the economic engine.
Lo and behold, with Greek voters as gullible as ever to populist rhetoric and empty promises, Syriza’s trickery worked. The fiery messages of Syriza’s leader Alexis Tsipras , although a poor imitation of the political rhetoric of Andreas Papandreou and a comparison between the two leaders in terms of pure intellect and status would be a sacrilegious one), caught one and the unthinkable happened: a marginalized political movement with ambivalent positions and even ludicrous views on a broad variety of social and economic issues won the national elections in January 2015, scoring an historic victory for the Greek Left.
Of course, everyone knows what happened next. After months of crude negotiation tactics that had the imprint of a personal political agenda written all over them rather than a carefully considered and planned negotiation strategy for the enhancement of Greece’s national interests (courtesy of former Finance Minister and ring master Yanis Varoufakis), the creditors threatened the Greek government with Grexit and came close to pulling the plug on the capitalization of Greek banks. The result, especially following the sham bailout referendum of July 5, 2015), was the capitulation of the Syriza-led government to the infamous troika, which led in turn to the signing of a third bailout agreement in August 2015, and the complete abandonment of the Thessaloniki program.
In short, the Coalition of the Radical Left was converted into yet another enforcer of the Berlin-Brussels-Washington conceived austerity program overnight, thereby betraying the hopes of all those who had led themselves to believe that a political party of amateurs, with a provincially minded leader at the helm, could challenge successfully the euromasters and do away with the neoliberal structural adjustment program implemented by the IMF over the course of the past 40 years or so on all nations that end up seeking financial assistance from the international community.
What went wrong? Was the problem simply the negotiation tactics of the Syriza-led government that led to its capitulation and the euromasters tightening the economic noose around Greece’s neck?
Analysts, pundits and intellectual lightweights of all ideological orientations (especially economists associated with the defunct Keynesian tradition, who are profoundly ignorant of political economy and rely on pure behavioral models of economic analysis with abstract scenarios as a guide for what needs to be done) who seem to believe that economic and political relations among nations that find themselves in a condition of dependency vis-à-vis powerful nations can be undone through the simple pursuit of effective negotiation tactics with their ‘‘masters” are convinced that Syriza’s poorly developed and executed negotiation approach with Greece’s international creditors lies at the root of how things have turned out since Syriza’s rise to power.
Indicative of the above state of affairs, Harvard Law School’s Program on Negotiation – one of the most intellectually superficial undertakings in the world of academia — has just released a brief analysis which lists the top worst negotiation tactics in 2015.
Yes, you guessed right. Syriza’s negotiation tactics tops the list. But without any analysis into the dynamics of ordinate-subordinate politico-economic relations among nations and the examination of alternative strategies for the pursuit of national economic and social development, all that the editor of the Harvard newsletter on negotiation tactics can say about what went wrong with the outcome of the Syriza-led government’s negotiation approach towards Greece’s international creditors is that “a conciliatory approach” would work better when one is making “bold requests.”
In other words, surrender your rights to an all powerful political entity with a smile on the face, which is exactly what the two previous Greek governments seem to have done in their dealings with the troika.
So much for political analysis and diplomacy lessons by the world’s leading academic institution.