The Etymological Roots of Melomakarona and Kourambiedes 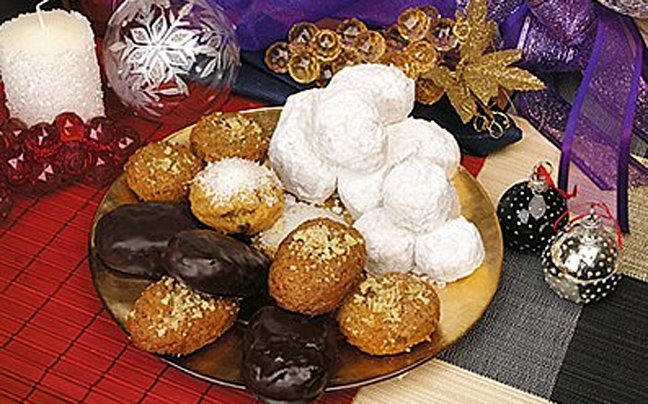 Melomakarona and kourambiedes are two Greek desserts that scream Christmas. Dimitris Stathakopoulos, professor of historical sociology at Panteion University, in Athens, gathered data and determined the etymological roots of the two words.
Qurabiya in Azeri, Kurabiye in Turkish and kourambiedes in Greek come from the word “Kuru” which literally means dry, and “biye” which translates to biscuit, so essentially kourambies (or kourambiedes in its plural form) is a type of dry biscuit.
The work biscuit first appear in the Middle Ages, etymologically derived from the Latin biscuit, which means baked twice, a method of cooking that prevented the bread for going bad. In Greek the same method was described with the word “dipyron.”
The Latin word “biscuit” spread by Venetian merchants in Asia, where it was established as biya/biye and connected toKuru (dry) giving two new oriental words for biscuit: “Qurabiya” and “Kurabiye.” The two words were later reintroduced in the West, giving the hellenized word “kourambies.”
As for melomakarona the word has its etymological roots in ancient Greece. Dictionaries note that the word “macaroni” (meaning pasta”) derives from the medieval Greek word “makaronia” (a funerary dinner containing pasta that blessed the dead). The makaronia in term comes from the ancient Greek word “makaria,” which used to be a piece of bread in the shape of the modern-day melomakarona, which was offered to people who attended a funeral.
Later, the makaria recipe was changed, adding honey (“meli”) therefore the name changed as well to melomakarono. The Latins and later the Italians used the word makaronia as maccarone, which eventually came to mean pasta.
See two original recipes for the best kourabiedes and melomakarona here