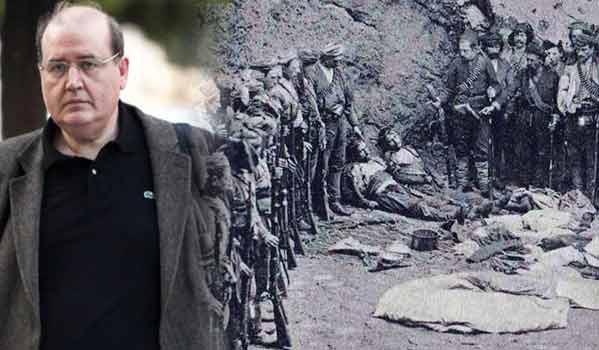 The “I am more leftist than thou” game between Greek cabinet members continues as new Education Minister Nikos Filis tries to outdo his predecessor in refusing the importance of the Pontic Genocide.
There is no other reason to explain Filis’ insistence on his refusal to accept that the slaughtering of 350,000 Pontian Greeks by Turkish troops between 1914 and 1923 was genocide but ethnic cleansing. Despite the relentless fire he received from opposition parties, Pontic organizations, teachers, even members of his own party, the education minister prefers to remain adamant. As if his personal opinion is the most important of all, even though he touched on an issue as sensitive as this.
Filis claimed that his opinion is based on scientific grounds. Interesting how a person without a university degree reverts to “scientific” definitions to support his positions. Probably he is unaware that other than the Greek Parliament, U.S.A., Australia and Sweden have also recognized the Pontic Genocide. In fact, he showed more arrogance by saying that his opinion has been exploited for nationalistic arguments.
In June, previous SYRIZA education minister Aristides Baltas decided to remove the topic of Hellenism by the Black Sea between the 19th and 20th century — in other words Pontian Greeks — from the curriculum of 12th grade. This is as if the Pontian Greeks, their culture, and their annihilation by the Turks are mere footnotes in Greece’s history, not worthy of teaching.
The education minister seems to have managed to outdo his predecessor because his statement infuriated more Greeks of Pontic descent who organized a protest rally on Thursday, November 5, at 4:00 pm at Syntagma Square in Athens.
“The hits the Pontic Hellenes are receiving by the government are repeated and substantial. The abolition of subsidies to our compatriots leads them to poverty and death. The removal of the topic “Pontic Hellenism”, the only one with the reference of the genocide censors education and distorts history,” the PanPontian Federation of Greece statement reads.
“The culmination of insults against us is the recent shameless denial of the Pontic Genocide by the minister of education,” the statement further reads.
Government spokesperson Olga Gerovasili supported Filis saying that it is his own opinion and it does not represent the opinion of the Greek government. Nevertheless, several SYRIZA lawmakers said they recognize the killing of 350,000 Pontian Greeks as genocide. Prime Minister Alexis Tsipras conspicuously avoided to comment.
SYRIZA’s junior coalition partner ANEL also distanced themselves from the minister’s comments. “We believe we do not have the right to nullify the planned, tragic uprooting of thousands of people who were sacrificed in a violent manner,” said the rightist party’s spokeswoman Marina Chrysoveloni.
New Democracy leader Vangelis Meimarakis called on Prime Minister Alexis Tsipras to publicly condemn Filis’ statements, which he labeled a “shameless insult to national memory.”
A group of 45 conservative MPs submitted a petition in Parliament asking Tsipras to terminate the minister. Golden Dawn, claimed they will take legal action against Filis under an anti-racism law passed in September 2014, which seeks to criminalize denial of historical acts of genocide, including that of the Black Sea Greeks, and leaves offenders facing up to three years in jail.
Ironically, Filis’ comments fit perfectly with the Turks who deny that they are guilty of the genocide. The Turkish press praised Filis’ comments, adding more fuel to the patriotic fire that burns against the minister.