GRNews
GreekReporter.comGreeceOXI Day: The Greek Word That Changed the Course of WWII Keeps... 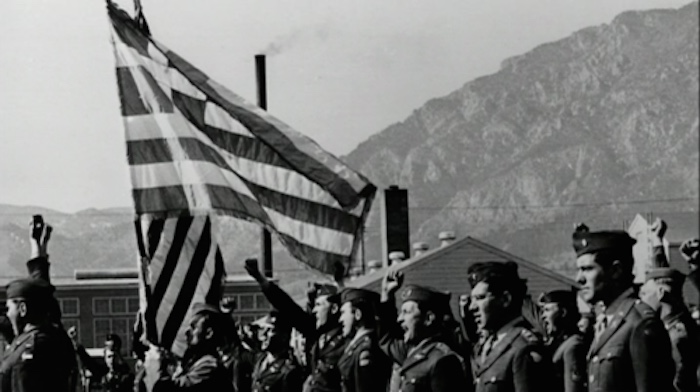 By George Beres
As Hitler learned Greeks can be stubborn against all odds. OXI, the word, NO, in Greek, may sound like a negative, but it has become the most positive word in the language. It suggests the independence of a small nation when confronted by selfish demands of much larger nations. We see it today in the response Hellenes make to the economic injustices Germany and other European countries try to impose on them.
OXI ! (ohee) Greece says when richer, more imposing European nations insist it give in to their demands. There was a moment in 1940 when that word — expressed with vigor and indignation by Greek Prime Minister Ioannis Metaxas — gave hope to a world that appeared to be giving in to the aggression of Germans, who were intent on military conquest. Adolph Hitler’s Nazi armies had moved eastward with ease, defeating France and sweeping through Czechoslovakia, Romania, Poland, and Yugoslavia on his way to what appeared to be an inevitable conquest of the Soviet Union. Once that was achieved, there seemed to be little hope for England to the west, nor for a purportedly isolated United States, that mistakenly felt protected by the westward expanse of the Atlantic Ocean.
It was early October when OXI changed the military equation. Italy tried to complete what seemed to be the simple task, to defeat Greece. The Italians demanded that Greece lay down her arms without a fight. But, they were met with OXI!, expressed loudly and clearly by the Greek prime minister. That was a heroic response from a man who in most respects was known to be dictatorial, like other national leaders in the Balkans. The Italian army crossed the Greek border for what it thought would be a perfunctory military exercise. The outnumbered Greek army, familiar with the mountainous terrain, repelled the overconfident invaders, and forced them to retreat.


That became the early turning point of the war. An exasperated Hitler, his armies moving at a steady pace in good autumn weather for what he thought would be certain victory over his most powerful foe, was forced to divert Panzer divisions to Greece, delaying his easy thrust into the heart of Russia. Greece was overcome, but not before it had given a great psychological lift to those who opposed Germany. By the time Hitler was able to resume his march into the USSR, his armies were confronted by a terrible Russian winter that caused them to stall outside Stalingrad. The Russians then steadily pushed them back across wasted farmland.
Current interaction between Greece and Germany is political, complicated by the late August resignation of PM Alexis Tsipras and his first government.
I get personal insights from several persons in Greece who have personal yet educated opinions about the current state of Greek politics. One writes:
“You can’t imagine what we are going through with a so-called leftist government. I had some hope for it at first. But it had to cooperate with a fascist party and a so-called Independent Party that broke off from its conservative leaders. This resulted in a shattered party trying to lead a shattered government. People are without food. Banks have closed because of capital controls, people grab at whatever source of income or alliance they can get. New elections would accomplish little, and cost a great amount of money the government does not have.”
Another wrote, “What we desperately need is funding for development, not for immediately paying off our debts. Investments from outside Greece could boost business, exports, and research. We must not get loans from profit-making banks, but use what money there is to put our economy into full gear so we can pay our debts with our own profits. One does not have to be an economist to understand that development programs could build Greece, while more austerity would kill it.”
Historians almost a century later — both of Germany and of the West — agree that it was the early resistance of Greece that made defeat of Germany in World War II possible. OXI!, expressed by a tiny country that knew of the deprivations it would face in the aftermath of its stubborn heroism, changed the course of the war. Now after the passing of 76 years, Germany again tries to bring Greece to its knees, this time with economics instead of warships. Its harsh economic stances of today have historical precedence dating back to before World War I and leading into World War II, both begun by Germany.
Composer Mikis Theodorakis of Zorba, described for me the situation in political terms: “It is becoming a dictatorship of the creditors in Greece today, and could become a class war. Greek voters seek to escape the neo-liberal empire of Washington and Berlin, who demand unrestricted globalized privatization of government services and public properties. We must wrest power from the hands of financial elites, and reassert a democratic program.”
He sees long lines waiting at embassies as desperate Greeks try to escape the country. Most are denied, and some migrate illegally. At the same time, refugees from the Middle East flow over porous sea borders into Greece, which has no way to care for their needs.
One can understand why it is hard for Greeks to live today by traditional principles and values of democracy, the legacy they gave the Western world. One wrote me, “Some in Greece have accepted the terms set up by Germany in order to avoid bankruptcy, and because saying OXI is difficult when there is no food on the table to feed your children.”
Yet while still facing the heaviest of odds, some Greeks again are choosing to resist.