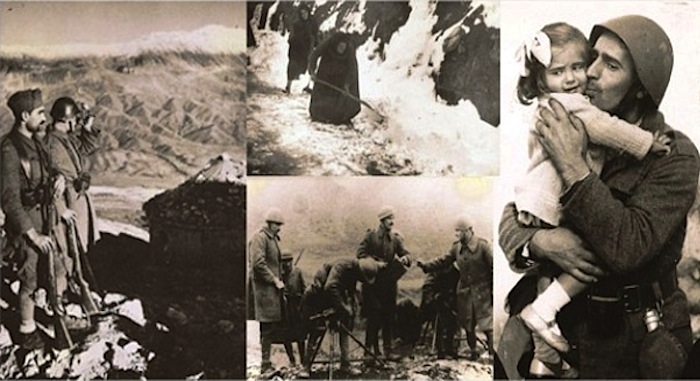 Few great moments of Greece’s history are so well documented as the defiant “OXI” Prime Minister Ioannis Metaxas told the Italian Ambassador in Athens Emanuele Grazzi at three o’clock in the morning of October 28, 1940.
Grazzi visited Metaxas’ home to deliver an ultimatum from Italian leader Benito Mussolini.  Il Duce, as Mussolini was affectionately called by Italian people, demanded that Metaxas allow the Italian army free passage to enter and occupy strategic sites in Greece unopposed.
Faced with the preposterous demand, the Greek prime minister delivered an unequivocal response in French, the diplomatic language of the day: “Alors, c’est la guerre.”  This brief phrase, “Then, it is war,” was quickly transmuted into the laconic “Oxi“ by the citizens of Athens.
Metaxas’ stance expressed the feeling of all Greeks. The Italian ultimatum was in full sequence of the war actions of both Nazi Germany and Fascist Italy throughout Europe and Africa. It was preceded by the torpedo attack of an Italian submarine against Greek warship “Elli” on August 15, 1940 at the port of Tinos island.
On the morning of October 28, Ioannis Metaxas addressed the Greek people over the radio. His proclamation was:
“The moment has come that we will fight for the independence of Greece, its integrity and its honor.
Even though we kept the strictest neutrality and equal distance to all, Italy does not recognize that we should live as free Greeks and asked us today at three in the morning to surrender part of our national territory of their choice otherwise they would start military moves against us at six in the morning. I replied to the Italian ambassador that I consider the request and the manner the request was made as Italy’s declaration of war against Greece.
Greeks, now it is time for us to prove if indeed we are worthy of our ancestors and the freedom that our forefathers secured for us. Our nation as a whole will rise united as one body. Fight for our Homeland, our women, our children and our sacred traditions. Now we fight for everything.”
The Italian army attacked at 5:30 in the morning, half hour before the expiry of the ultimatum. But Greece’s General Staff had prepared its defense and the Greek army managed to smash the Italian divisions at the mountains of Pindos and Kalpaki in the Epirus region.
For 75 years, the first radio broadcasted report of the Italian attack rings eerily in the  ears of every Greek: “Αι Ιταλικαί στρατιωτικαί δυνάμεις προσβάλλουσιν από τις 05.30 ώρας της σήμερον τα ημέτερα τμήματα προκαλύψεως της Ελληνοαλβανικής Μεθορίου. Αι ημέτεραι δυνάμεις αμύνονται του Πατρίου εδάφους.”
(The Italian armed forces have attacked today at 5:30 in the morning our embankments in the Greek-Albanian border. Our forces are defending the fatherland.)
The Duce wanted to advance very quickly in Ioannina and Metsovo, but the Italian army met the fierce resistance of the Greek divisions. Within three weeks, Greece was completely free of the invading forces and began a counterattack, driving deep into Italian-held Albania.
Mussolini was humiliated and enraged. Adolf Hitler was also furious at what he viewed as Mussolini’s blunder. The Greek victory delayed, or rather completely changed Hitler’s plan. In those dark hours, Greece was the only country in Europe that resisted the advancement of the Axis.