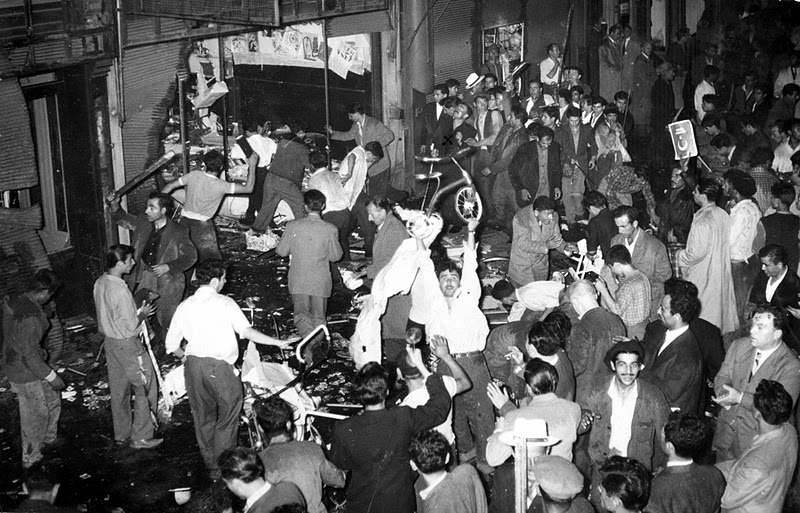 A memorial Divine Liturgy was held at the Yeniköy Panayia Greek Orthodox Church in İstanbul on Sunday for the first time in Turkey to commemorate the lives lost during the pogroms targeting İstanbul’s Greek Orthodox Turks in 1955.

Greek Orthodox Turkish citizens –known as Rums– and other non-Muslim minorities such as Jews and Armenians were persecuted on September 6, 1955. According to estimates, 15 people were killed, 300 injured, 400 women were raped by Turks. Also, 4,214 homes, 1,004 businesses and 73 churches were damaged, according to Today’s Zaman.

The Turkish newspaper says that the spark that led to the 1955 pogroms were reports that the house in which Turkey‘s founding father Mustafa Kemal Atatürk was born in the city of Thessaloniki in northern Greece had been bombed. Angry rioters were then assembled by the Turkish Army’s Tactical Mobilization Group and sent to raid and destroy Rum-owned businesses and churches and assault Rum citizens.

On Saturday, a documentary produced and directed by Yorgos Mutevellis covering the 1955 pogroms was screened at the Cezayir Restaurant in İstanbul. Afterwards, a panel discussion took place featuring Dr. Samim Akgönül, journalist Rıdvan Akar and Niko Uzunoğlu, the chairman of the Universal Federation of İstanbulite Greeks Abroad (IREF) to discuss the past and relate past events to today.

Uzunoğlu, who was born and raised in İstanbul and is now a professor at the National Technical University of Athens, discussed the goals of his group, which sent a petition to the parliamentary party chairpersons of the political parties represented in Greek Parliament. The petition asks for official condemnation of the incidents and recognition of the rights of those who had to leave Turkey. The federation has also asked that the Turkish government encourage the return of those who left Istanbul.