GRNews
GreekReporter.comGreeceTsipras Visits TIF and Expresses Hope He Will be Greece's PM for... 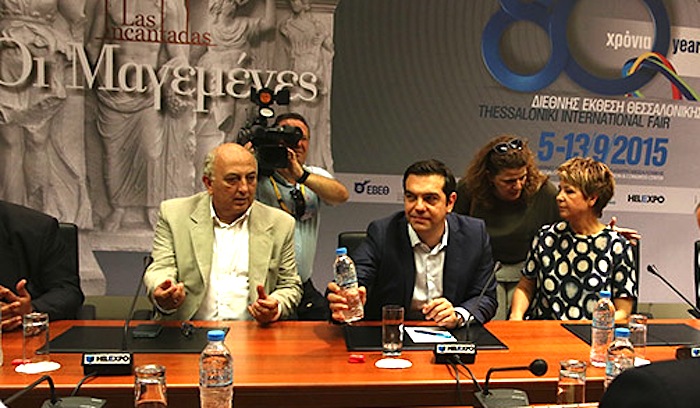 The Thessaloniki International Fair (TIF) in northern Greece has been traditionally inaugurated by the Greek Prime Minister. The September 20 snap elections meant that the President of the Hellenic Republic took on this responsibility on September 4.
Former Greek Prime Minister and SYRIZA leader Alexis Tsipras visited the TIF on Sunday, two days after the inauguration, and made his political aspirations known.
“It does not matter that I did not inaugurate the fair as prime minister. I will have the opportunity for the next eight years,” he told TIF president Tasos Tzikas.
Tsipras was given a tour of the fair’s various stands and exhibitions. However, his visit did not go very smooth as a number of women, who claimed to be the relatives of mine workers on the Skouries mine, whose development the government has halted, verbally attacked Tsipras.
Tsipras: No Chance of Cooperation with New Democracy
New Democracy leader Evangelos Meimarakis had said on Saturday that he is open to forming an intra-party unified national plan, following the elections, that the Greek government would present to international creditors by March 2016 as an alternative to the Memorandum.
During an interview to Greek television later on Saturday, Tsipras rejected the possibility of forming a coalition government with New Democracy and questioned Meimarakis’ call for unity.
“Why has Mr. Meimarakis suddenly loved me? When during his first interview he called me ‘a little liar,’ ‘a little bit cunning,’ a ‘political miscreant,’ how can he talk about cooperation? That is hypocrisy,” he said.
Tsipras noted that Meimarkis adopts this rhetoric to promote the idea that everyone is the same, as that is his only chance for success.
“There is no possibility or room, and everyone knows this, for a government cooperation, because our agendas are very different. And because, aside from ideology, we know very well there is no common goal. We want to tear down what New Democracy and Mr. Meimarakis want to maintain,” he said.
Tsipras also reiterated he will not work with the old political system but did not openly deny cooperating with PASOK or “To Potami.”