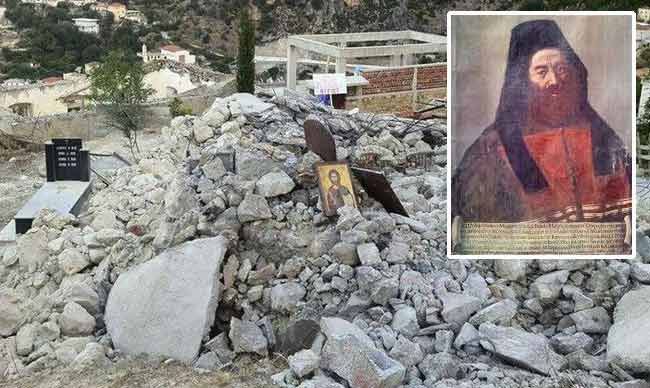 The Albanian government said that a statue of Catholic missionary Nilo Catalano will be erected in place of the Saint Athanasios Orthodox church that was demolished on Wednesday.

The Saint Athanasios church in the village of Drymmades was demolished by the Himare municipality despite protests by the Orthodox Church of Albania, the Greek foreign ministry and the local faithful.

In a written statement, the Orthodox Church of Albania denounced the provocative act, noting that it is a continuation of what happened in 2013 in Përmet. “It is sad and insulting in our days to watch the Holy Bible, Gospel icons and other sacred objects buried under ruble. This is reminiscent of the sacrilege in the Church of Our Lady in Përmet where all the sacred items were thrown onto a garbage truck,” the statement said.

The Orthodox Church of Albania rebutted all claims of the Albanian authorities that the site of the church was a historic monument, or that the the chapel was illegally built and it was not the property of the Orthodox Church. They provided all pertinent documents showing the chapel is Church property and was built in 1671 and prove that all claims of the Albanian authorities are false.

Nevertheless, Kotsio Kokedima, a close collaborator of Albanian Prime Minister Edi Rama, who is a Socialist Party MP, businessman and publisher will be a key sponsor in setting up the statue of Catholic Bishop and missionary Nilo Catalan in place of the demolished chapel, despite the reaction of the Drymmades villagers and other Orthodox Christians.

Nilo Catalano lived in the 7th century and according to historical accounts he was trying to convert Orthodox Christians to Catholicism. The Albanian government claims that Catalano also helped spread the Albanian language in the region. However, historians say that the Albanian alphabet was established in 1908.