The End of SYRIZA As We Know It 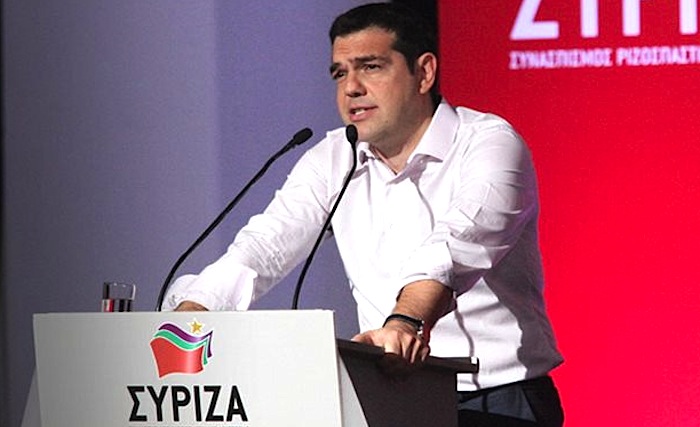 There is a 1962 Cold War film called “The Manchurian Candidate” in which a former Korean War POW is brainwashed by Communists into becoming a political assassin.
The Alexis Tsipras who came back from Brussels on July 13 after signing Greece’s third, and most harsh, bailout agreement bears a big resemblance to the film’s brainwashed character. Because the man who returned from Brussels had nothing to do with the leftist, defiant, militant firecracker who celebrated the big “No” victory in the referendum a few nights earlier.
The Alexis Tsipras who came back from Brussels was a condescending, conforming, flexible Prime Minister who changed course and started talking about the necessity of a bailout deal –a Memorandum, alas– as if forgetting that his political career and rise to power was based on fighting the hated “Memoranda.”
Conspiracy theory buffs may claim that those evil Europeans brainwashed Tsipras during that fatal marathon Eurozone summit and then released him to be the Trojan Horse that would let them invade Greece and steal the Acropolis.
Along with Tsipras, the majority of SYRIZA cabinet members and MPs transformed as well. From one day to the next, their bold defiance and brave declarations turned to a vague ideological mishmash, defending the thing so vehemently opposed to all along. Suddenly, the word “Left” that adorned every other sentence they uttered, disappeared from their vocabulary. So did the word “Memorandum.” All of a sudden, their leftist romanticism turned into an unexpected pragmatism: that those damned loans are absolutely necessary to keep the wheels turning.
With almost a third of SYRIZA lawmakers abandoning ship and going to find more leftist pastures with Popular Unity, what is left of the party does not sound at all like the SYRIZA that won the January elections and July referendum. The new trimmed-down SYRIZA has lost most of its big guns. Most of the MPs who went to Popular Unity are elected in critical electoral regions where it is most likely that it is the person and not the party that will determine where the ballot is cast.
The most outspoken and self-promoted lawmakers such as Yanis Varoufakis, Zoe Konstantopoulou, Rachel Makri, Panagiotis Lafazanis, Costas Lapavitsas, Dimitris Stratoulis, Theodoris Dritsas, Tasia Christodoulopoulou, Tassos Koronakis, are big names that more likely will steal many votes from SYRIZA. But most importantly, due to the electoral regions they belong to, they will grab precious seats in the Parliament.
Popular Unity has turned out to be the SYRIZA of yore; the hard-stance opposition party that said no to everything the government proposed. The party that makes big promises, knowing they are impossible to keep, like nationalizing banks and issuing a drachma with a 1:1 exchange rate to the euro. Yet, a large number of Greek people are so desperate that they need to cling to such unrealistic promises, shifting votes from SYRIZA to Popular Unity.
At the same time, the remaining SYRIZA members show an unjustified confidence they will win the election and form a majority government. They have already precluded cooperation with all parties except the Independent Greeks (ANEL), their willing junior coalition partner.
The question many voters already raise is: what is the purpose of this election? Tsipras and his team have probably not decided yet. Now, they are forced to fight to win the parliament in order to implement a reform program they don’t truly believe in. Unfortunately for SYRIZA, a number of voters believe that Tsipras went to snap elections in order to get rid of his party’s Left Platform without spilling any blood. Others believe that his resignation is an admission of defeat and deep inside he desires to lose this election. Also, there are those who believe that he is a traitor who made a secret deal with creditors. Others find him too indecisive, too young and immature to govern during such critical times.
Most importantly, in the eyes of many, he proved to be just like the others: the professional politicians who brought Greece to this dire situation. Whatever the case, his advantage that he goes to elections before the new inflated tax bills arrive in people’s mailboxes may not be enough to counteract voters’ disaffection and disappointment. Now, he has nothing to promise people.
In the January elections, SYRIZA beat New Democracy by 8.5 percentage points, 36.5 to 28 percent. It is projected that Popular Unity will steal 8-12 percent from SYRIZA. One should not rule out the possibility that the difference between SYRIZA and New Democracy will shrink, and Tsipras may not even be able to form a coalition with ANEL if the two parties do not get 151 parliament seats combined. Nevertheless, he declared that he will not cooperate with any party of the old political system, meaning New Democracy, PASOK and “To Potami,” which incidentally are the three pro-Europe parties.
And he will not hesitate to call for new elections if he fails to form a government.