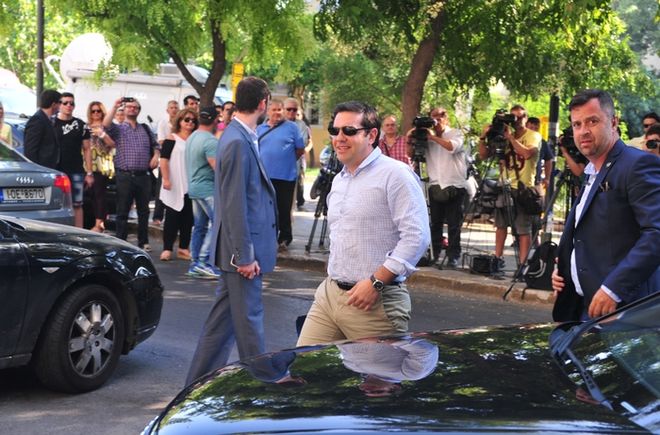 “Elections are a celebration of democracy” is a slogan that has often been heard from the lips of SYRIZA members. The key word here is “celebration,” as SYRIZA members and voters like to celebrate.
In the past few months, SYRIZA celebrated the January 25 electoral victory, the rehiring of the Finance Ministry cleaners, the reopening of the national broadcaster, the “No” in the July referendum and the March 25 military parade, among others.
Now they are ready to celebrate again. Despite the new blow to the Greek economy.
As the Greek economy tries to recover after a cruel summer of capital controls, closed banks, political uncertainty, creditors’ mistrust, tens of thousands of jobs lost and hundreds of businesses shutting down, and to top it all, a tsunami of refugees and migrants arriving in the Greek shores. Among all these grave problems, Alexis Tsipras‘ main concern was the attacks he received from his SYRIZA comrades accusing him of betraying his leftist agenda.
It is obvious that Tsipras resorted to elections in order to sort out the problems within his party. He turned a party dispute into a national issue and now drags the country to another ballot, the third in 9 months. In other words, the country will go to about two months with absence of government because Tsipras didn’t have the guts to kick the anti-Europe rebels out of SYRIZA. Instead of going to a head-on collision with his party’s dreamers, he chose to stop the gears of a whole country and spend tens of millions of (borrowed) euros to an election procedure that, essentially, will not resolve much.
The (now former) Prime Minister spoke of a “fresh, clear mandate” to govern. Apparently, for Tsipras, people’s mandates get old and stale after seven months. Or people’s needs and wishes change in a few months.
Dodging responsibility has been Tsipras’ modus operandi in the past seven months. For failing in negotiations, he blamed the “blackmailing creditors”; for closing the banks, he blamed the “bad” European Central Bank; for losing the clear majority in his party, he blamed the drachma-loving rebels in SYRIZA; for having to actually deal with Greece’s economic woes, he blamed his predecessors and the “vile” Memoranda they lightheartedly signed; for choosing an authoritarian megalomaniac as Parliament President, he blamed the authoritarian megalomaniac Parliament President; for failing to tackle the migration issue, he blamed Europe for not participating in the effort. It was always someone else’s fault, never his own.
Most of his political moves have been a gamble. He chose to call an ambivalent referendum to get out of the negotiation deadlock; the results were equally ambivalent and did more damage than good. He flirted with Russia as a negotiating ace up his sleeve; it didn’t work for him.
Now he is buying about two months time to plan his next move. The most likely outcome of the snap elections will be a weak majority that won’t allow him to form an autonomous government. He will, once again, have to seek alliances. Probably with the Independent Greeks for the second time. But this time, New Democracy, PASOK, and “To Potami” will not back him on voting for the new required reforms. And his former comrades will be fighting him from different parliament seats. So, essentially, nothing will change in the new parliament.
The only reassuring thing is that Greece’s European partners support his move to go to snap elections and seem optimistic that the new government that will come out of these elections will implement the reforms required for the country’s bailout. Maybe they know something that we Greeks don’t.