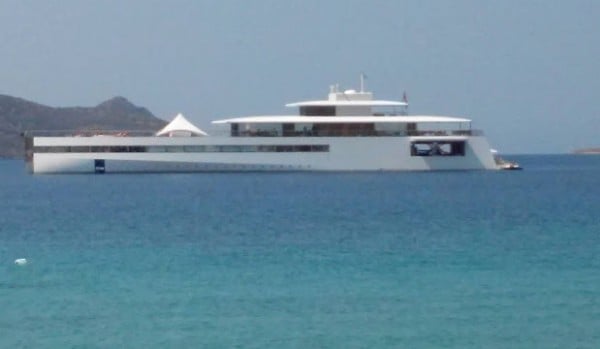 Legendary yacht Venus anchored off the coast of Samos and has became an attraction for locals and tourists. The luxurious yacht arrived on the Greek island on Saturday morning, July 25.
Venus is a yacht designed by Philippe Starck’s design company Ubik and built by billionaire and Apple founder Steve Jobs. The boat’s hull is made entirely of aluminum, measuring 79 meters in length and costing a total of 100 million euros. It was first unveiled in 2012 and it now belongs to Laureen Powell, Jobs’ widow.
The billionaire was not able to see his work completed since he passed away in 2011 due to a pancreatic tumor.
Jobs was an American pioneer that took part in the personal computer revolution of the 1970s, along with engineer and Apple co-founder Steve Wozniak. Jobs is described by his official biographer, Walter Isaacson, as a “creative entrepreneur whose passion for perfection and ferocious drive revolutionized six industries: personal computers, animated movies, music, phones, tablet computing and digital publishing.”