The Institutions Return to Athens 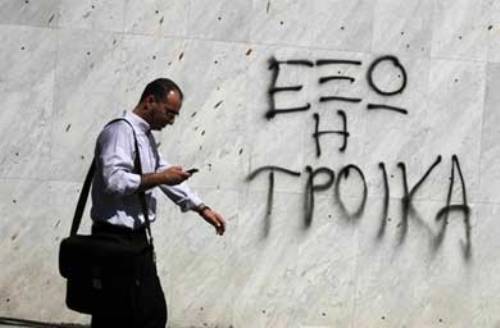 The institutions, formerly known as the Troika, are back in Athens.
Representatives of the European Central Bank (ECB), the European Commission  the International Monetary Fund (IMF) have returned to Greece. This time, however, there will be a fourth organization delegating officials in Athens as European Stability Mechanism (ESM) representatives will join discussions.
The institutions’ visit to Greece had been a well-known routine in the pre-SYRIZA era since Greece’s first bailout in 2010. One of the SYRIZA-ANEL administration’s goals was to terminate these visits in Athens and have the discussions take place in Brussels. For the most part, these systematic visits did stop, though the institutions’ representatives did come to Greece in March.
Today, the landscape is different from what it was six months ago. The Greek government capitulated to the creditors’ demand that the institutions make their regular outings in Athens in order to secure an 86-billion-euro bailout deal. The institutions have come to Athens to assess the damage caused by the capital controls and check Greece’s General Accounting Office.
The ECB will be represented by Rasmus Ruffer. Although this is Ruffer’s first direct involvement with the Greek program, he had been in the Troika’s negotiating team for Portugal’s bailout package.
The European Commission representative is Declan Costello, who has been the Commission’s representative for more than a year.
Finally, the IMF representative, Rishi Goyal, is also a familiar face in Athens, having represented the Fund in negotiations with Greece since August 2014.