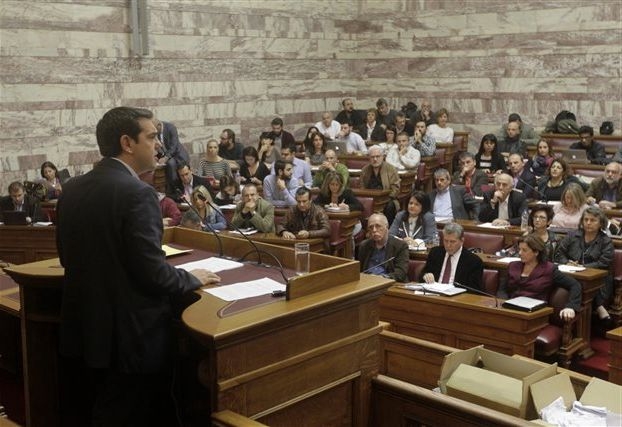 Greek Prime Minister Alexis Tsipras has not decided yet on the persons that will fill the seats on the cabinet reshuffle but sent a strict message to the 32 lawmakers who voted against the reforms required for the bailout agreement.
Tsipras spoke to the SYRIZA Parliamentary Group expressing his disappointment that he didn’t have the support of all members but at the same time he told them he is not backing down and he will continue to be the prime minister, even with the minority of parliamentary support.
He also said that his fellow party members who voted against the “blackmail” never made a comprehensive alternative proposal. Instead, they indirectly hurt the party, he hinted.
“The fact that there was no substantial and substantiated objection on the blackmail, makes the choice of 32 members of the Parliamentary Group to not share the responsibility, both with myself and with the other 110 SYRIZA MPs, a choice that is contrary to the principles of camaraderie and solidarity, and it is an open wound in our party during a critical time,” the Greek prime minister said.
“Personally I can not permit to anyone, after all that I went through in the past six months, to believe that they face a harder consciousness dilemma than I do regarding our shared principles, values, positions and ideology,” he added.
The prime minister said he is determined to continue despite the dissidence, even with a minority government. “The choice of our comrades to not support us makes the first ever leftist government in Greece inoperative. I am forced to continue with a minority government in a 300-member parliament until the completion of the agreement.”