Who Will Be New Democracy's Next Leader? 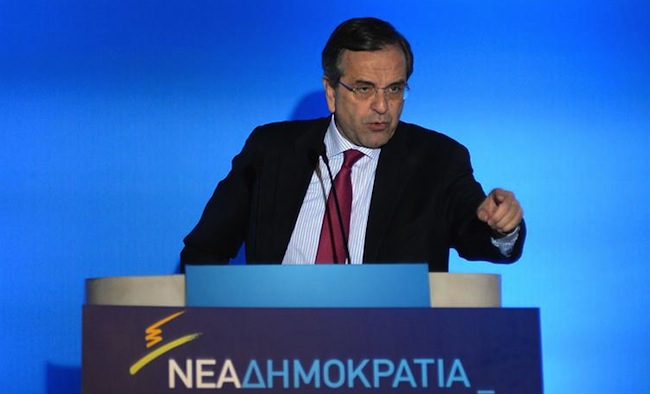 Following Antonis Samaras’s resignation as New Democracy party president after the victory of the NO vote, which Samaras and the party vehemently opposed, questions arise over who will take over the party’s reigns.
The leadership currently lies in the hands Evangelos Meimarakis, President of the Greek Parliament from June 2012 until June 2015 and Minister of Defence from 2006 until 2009. Meimarakis, who is serving his fifteenth term in the Greek parliament, is not officially the party’s president because his leadership position needs to be ratified by the party. If more candidates for the position turn up then the party will hold an election to choose a president.
Aside from Meimarakis, a number of people could be considered strong candidates should they opt to run for the position.
Dora Bakogianni, a long time party member and Foreign Affairs Minister from 2006 to 2009, ran for the Party’ presidency against Samaras in November 2009 and lost. Bakogianni was expelled from the party in 2010 for defying the party line and voting in favor of the austerity measures in Greece’s first bailout deal. She rejoined New Democracy in May 2012 before the June legislative elections that the party won.
Reports, that were later confirmed by New Democracy sources, said that this past Saturday, Bakogianni had urged Samaras to step down as the party’s president to strengthen the Yes vote in Sunday’s referendum.
Bakogianni is also the daughter of New Democracy’s Honorable President Konstantinos Mitsotakis who was Prime Minister from 1990 until 1993, and brother of New Democracy parliament member Kiriakos Mitsotakis.
Kiriakos Mitsotakis could prove to be his sister’s opponent in the quest for leadership. Mitsotakis has been a parliament members since 2004 and is forty-seven years old. He therefore lacks the experience that other potential candidates have but has also had a leadership position as he ran the of Ministry of Administrative Reform and e-Governance from June 2013 until January 2015.
One other possible candidate with a very influential position in New Democracy’s history and a person who has held a variety of posts is current European Commissioner for Migration, Home Affairs and Citizenship, Dimitris Avramopoulos.
Among the different responsibilities he has assumed, Avramopoulos was deputy leader of New Democracy in 2010. He has also been Minister of Defence, Minister of Tourism, Minister of Foreign Affairs and Minister for Health and Social Solidarity throughout the 1990’s and the 2000’s. Avramopoulos’s experience and his role in the front-lines in New Democracy’s past 20 years should have earned him a significant following within the party.
Nikos Dendias, a parliament member since 2004 and the  Minister of Public Order and Citizen Protection from June 2012 until June 2014, could also run for the presidency. Dendias posted a number of tweets today that seemed to be aimed at Samaras.
“The responsibility for the results is not the same for all of us” he wrote and added“Today is not the right moment to discuss what we will do at New Democracy. We will look at that tomorrow.”
Finally, it is worth mentioning that in a recent poll that asked supporters to pick the person they would like to see leading the party, former Prime Minister Costas Karamanlis was the most popular choice. Karamanlis responded by saying he is not interested in challenging for the leadership.
Meimarakis said earlier today that the immediate focus is Greece’s future and not the party’s presidency.