Cypriots Demonstrate in Favor of Greek ‘No’ 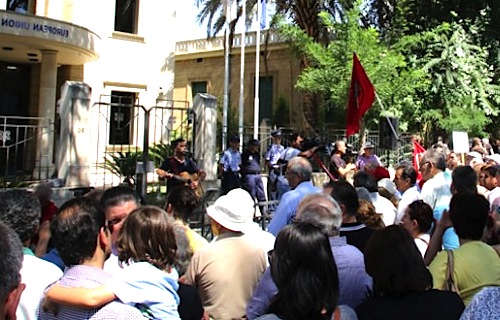 Protesters outside the European Union House in Nicosia, Cyprus, on Saturday expressed their solidarity and support to the Greek people, as well as their disapproval of the European Union and the International Monetary Fund’s austerity policies.
The crowd waved Cypriot and Greek flags, as well as banners that read “Resistance to the EU and the IMF’s austerity policies,” “Respect popular sovereignty,” and “Solidarity to the Greek people.”
Organized by communist party AKEL and the Movement Against Foreclosures, the protest featured a concert with Koullis Theodorou, as well as the reciting of poems by Bertolt Brecht and others, and was attended by the party’s leader Andros Kyprianou, deputies, MEPs, party and union officials.
Addressing the protest, Kyprianou condemned the “provocative, unacceptable and undemocratic” stance of European Union leaders toward Greece and the Greek people.
(source: cyprus-mail)