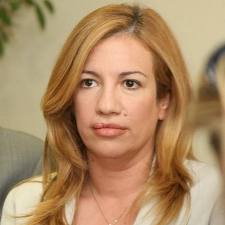 Fofi Gennimata was elected as the 5th PASOK President with 51% of the votes. The election took place during the party’s 10th conference.
On Sunday morning, June 14, party members and friends cast their votes in order to determine who would be the party’s next president, after current party leader Evangelos Venizelos decided to step down, one year before the completion of his term.
The candidates for the party’s leadership were Fofi Gennimata, Andreas Loverdos and Odysseas Konstantinopoulos. The PASOK members and friends voted in 350 election centers across the country.
The party’s first leader and founder was Andreas Papandreou, a Harvard-educated academic and dominant figure in Greek politics. On September 3, 1974, Papandreou founded PASOK and since then he served two terms as Prime Minister of Greece from October 21, 1981, to July 2, 1989, and from October 13, 1993, to January 22, 1996. He resigned due to ill health.
He was succeeded by Costas Simitis, a Greek politician who served as party President and Greek Prime Minister from 1996 to 2004.
When PASOK lost the 2004 elections, Simitis called for party president elections. George Papandreou, son of Andreas Papandreou, was elected and served from 2004 to 2011. He was also elected Prime Minister in 2009 and remained in office until he resigned on November 10, 2011.
PASOK’s fourth president, Evangelos Venizelos, was elected unopposed to replace Papandreou and led the party in the May 2012, June 2012 and January 2015 general elections. Venizelos, a professor of Constitutional Law at the Aristotle University of Thessaloniki, served as government Vice President and Foreign Affairs Minister from June 25, 2013 to January 27, 2015, as well as government Vice President and Finance Minister from June 17, 2011 to March 21, 2012.