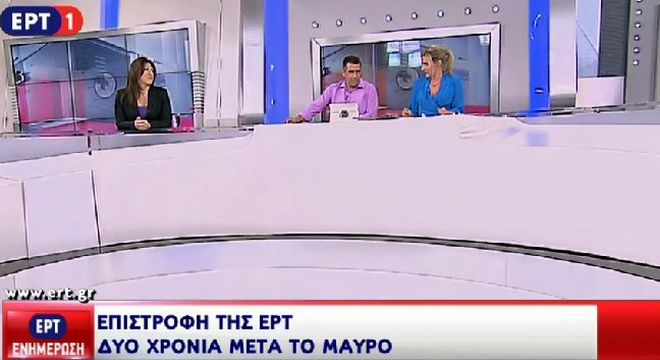 In an emotionally charged atmosphere, Greek national broadcaster ERT reopened on Thursday in the second anniversary of its closing down by the previous government as an austerity measure.
As the channel aired its first broadcast after two years, employees who were re-hired hugged each other amid tears and political slogans. SYRIZA party members called the reopening as “a victory of democracy,” and the blank screen of ERT (the “black”) two years ago has become a negative political symbol.
House Speaker Zoe Konstantopoulou was the first government official who went on air during the morning news program. Before the program, the national anthem was played while footage of Greece’s historical moments were shown on screen.
“It’s a special day for all Greeks, for philhellenes, for those who love Greece and for those who love freedom of information,” anchor Nikos Aggelidis said at the start of the news show.
First guest of the news program was the union president of ERT employees Panagiotis Kalfagiannis who was followed by Konstantopoulou. Then SYRIZA parliamentary representative Nikos Filis appeared and spoke along with his PASOK counterpart Yiannis Koutsoukos. Then several ministers appeared with Economy Minister Giorgos Stathakis and Labor Minister Panos Skourletis being the first two.
ERT, which cost about 300 million euros a year to run and employed 2,500 people, was shut down as an austerity measure by the New Democracy-PASOK coalition on June 11, 2013. It was replaced by a slimmed-downed broadcaster of about 650 employees called NERIT, which is expected to be merged or absorbed by ERT.
The closure of ERT generated a firestorm of protests, brought thousands to the streets and landed a blow in the coalition’s acceptability.
Prime Minister Alexis Tsipras had pledged before the elections that one of the first things the SYRIZA government would do to was to bring back ERT and re-hire all employees. The government has said that the re-hired staff of 2,500 – including about 600 journalists – would cost about 30 million euros a year funded by an existing monthly charge on electricity bills.
The previous days, workers climbed to the top of the broadcaster’s headquarters in Agia Paraskevi, Athens and removed the letter’s “N” and “I” from the logo.
A large concert to celebrate the reopening of ERT is scheduled on Thursday evening at the courtyard of the broadcaster’s headquarters.