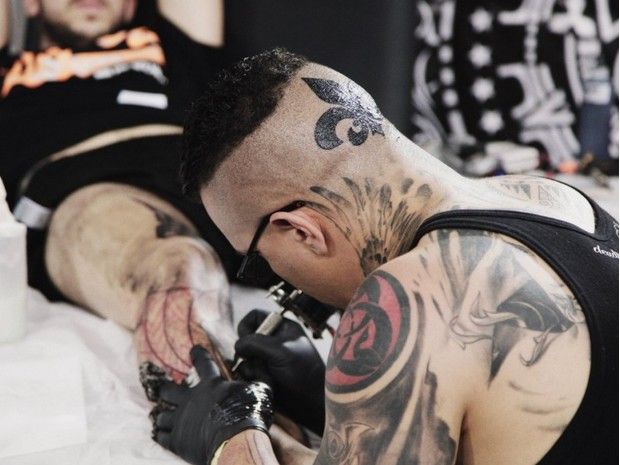 The Athens International Tattoo Convention sets the pace of the tattoo community in Greece for the 9th year in a row. The convention which lasts three days, May 15 to 17, will take place at Tae Kwon Do Stadium, in Faliro Bay by the Greek capital seaside.  More than 200 top Greek and foreign tattoo artists are expected to participate in the event. The convention aims to inform the public about ancient art and the meaning of tattooing, as well as about the new developments in the field.
In ancient times, tattoos were associated with sacred rituals and were considered to be religious symbols. The art of tattoos has a long history which began 5,000 years ago. The first tattoos were probably created by chance, when a person rubbed his hand in ashes and the color seeped through a small wound and later became a permanent mark. Explorers, merchants and sailors used to return from their trips with marks on their bodies, as a result of their encounters with people from Polynesia and the South Pacific.
Ancient Greeks learned about tattoos from the Persians, and the Romans learnt the art from the Greeks. Roman writers such as Seneca, wrote that many slaves had tattoos on their bodies. According to testimonies of the first Europeans who went to Samoa in 1787, the people there were covered with so many tattoos that they thought they were wearing clothes. The word tattoo has two origins: the Polynesian “ta” which means to hit something, and the Tahitian “tatau” which means to mark something.
The Athens International Tattoo Convention is organized by Red & White Productions and it follows the standards set by larger tattoo conventions across Europe.
After last year’s success with over 21,000 visitors, this year a large the large event space will welcome Greek and foreign artists, including American Nikko Hurtado who continues to inspire thousands of young artists around the world. The convention will also host various events for the public and it will feature various kiosks filled with tattoo supplies, clothing accessories, gadgets, airbrush works and permanent makeup.