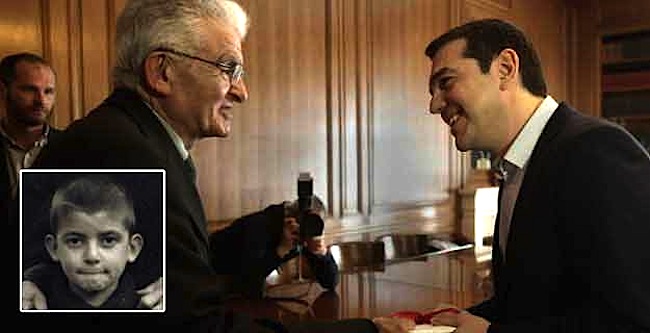 A meeting with the man who shocked the German public opinion with his narration of what the Nazis did in the village of Distomo, Greece, in June 10, 1944, held Prime Minister Alexis Tsipras on Monday. Argyris Sfountouris, a survivor of the Distomo massacre, was four years old when his father and thirty of his relatives were executed by the German occupation forces. For the last twenty years he has been waiting for justice to be delivered. His story became widely known after he appeared on a satirical program of German ZDF television network. He is currently in Athens where he will address an event at the Armed Forces Officers Club tonight.

Argyris Sfountouris was born in Distomo, in 1940. In April 1941 the German Wehrmacht invaded Greece. As a result of the occupation, a devastating famine ravaged the country, particularly the cities. However, farming families in villages far away from the cities managed to get by. But on June 10, 1944, Distomo was seized. After the soldiers of a German SS special division had blocked off all access to the village, a so-called retaliatory measure was initiated: to avenge a few fellow-soldiers who had died in a fight with Greek partisans near a neighboring village, the German soldiers first shot twelve farmers and then killed the villagers. They murdered more than two hundred inhabitants: babies, children, pregnant women and elderly people. Sfountouris lost his parents and thirty more relatives. The massacre, which took place just four days after the Allied forces’ landing at Normandy on June 6, 1944, is considered one of the most atrocious of its kind.

The boy, who was not even four years old, was put in a Piraeus orphanage, accommodating more than a thousand war orphans. As he was just skin and bones, he was transferred to a smaller orphanage on the other side of Athens. But despite better and more individualized care, he was barely able to digest the food because he suffered from a stomach ache.

Almost four years later, a Red Cross delegation paid a visit to the orphanage. They selected a number of children, eight-year-old Sfountouris among them, that were to be sent on a journey to a faraway country; to the Pestalozzi Children’s Village in Trogen, Switzerland.