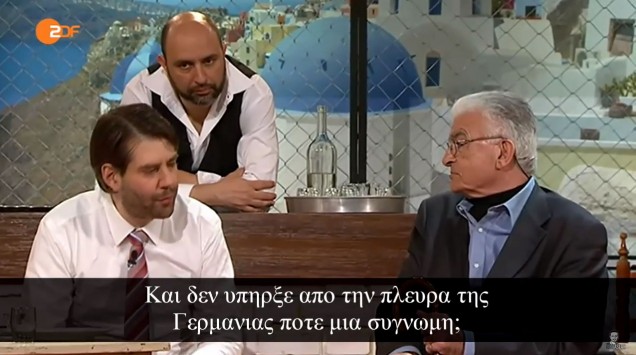 The show aired on German public broadcaster ZDF and started with three men representing Greece’s creditors arguing with a Greek tavern owner over Greece’s bailout program. Through very logical arguments with biting satirical overtones, the sketch showed how unfeasible some of the creditors’ requirements are for restoring the Greek economy.

Then the sketch took a serious turn in tackling the issue of war reparations and the forced loan Germany took from the Greek government during Greece’s occupation by the Third Reich forces. Again, through concise arguments, the show creators proved that compensation is due indeed and Germany has tricked Greece insisting that there are no legal grounds for its claims.

The sketch turned more dramatic when a survivor of the famous Distomo massacre appeared on the show. Argyris Sfoundouris was only 4 years old when the SS slaughtered 30 of his relatives among the 218 civilians — including children, infants and women — in June 1944.

The audience’s response was very warm in this definitely pro-Greek sketch, showing that humor can sometimes be the best way to present a good argument.