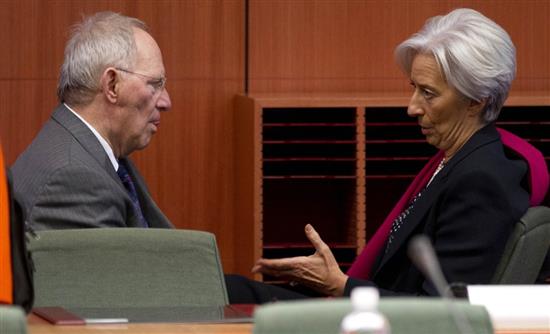 European and International Monetary Fund (IMF) officials came to the conclusion that there has been progress in Greece, however there is still much work that needs to be done after their negotiations with the Greek government. At the same time, international media brought to light new scenarios and Grexit plans.
Berlin and Paris seek more reforms, as does IMF chief Christine Lagarde who asked for more pension cuts. Pressure will start to build until the April 24 Eurogroup meeting, while an IMF board meeting will be held on April 18.
Lagarde: Greek pension plan is not sustainable
Lagarde appeared skeptical over whether Athens implements the measures that she discussed with Greek Finance Minister Yanis Varoufakis. “What I’m most concerned about is that the rest of our conversation be also implemented, that is we activate and accelerate the dialogue, the discussions of the reforms that the Greek authorities proposed to do in order to reach the objectives of the contract that they have with the European partners.”
Meanwhile, Lagarde made it clear that the government should engage in deep pension cuts, stressing that the current plan is not sustainable.
Referring to Greece during an interview with seven major European newspapers, including Italy’s “La Repubblica,” Lagarde expressed concern over the Greek economy’s medium-term prospects but also the fact that low and middle incomes are the ones mostly carrying the load during the crisis. The interview was given last Tuesday and published in “La Repubblica” on Saturday.
Lagarde said that much work remains to be done to improve the economy’s prospects and that this requires a high level of cooperation, adding that there is a “rich spirit of cooperation” on the part of the IMF.
She disagreed with a statement made by Brazil’s IMF representative Paolo Nogueira Batista that IMF rules had been “broken” in Greece’s case, describing them as “inaccurate” and “clearly biased,” Among others, she noted that the IMF had carried out a study on the fiscal adjustment demanded for various countries and discovered that the effort required by the Europeans was significantly larger, in terms of volume and content, than that required by countries in the Middle East.
Noting the high cost paid by the poor and middle classes, she said an effort is being made to change this and a system is set up to transfer the cost of bank bailouts from the general public to the financial institutions’ shareholders that found themselves in difficulties.


Berlin-Paris: Pressure for measures
A spokeswoman for German Chancellor Angela Merkel described Greece’s installment payment to the IMF as a “positive sign,” but stressed that “there is not even a list of reforms and that a lot of work remains to be done.”
Meanwhile, France expects Greece to make a list with further reforms if the country wants to receive new European aid, finding Athens’ progress insufficient.
“France’s position has never changed. We must take into account the Greek people’s vote but there is also an institutional framework and commitments that must be respected,” said French Prime Minister Manuel Valls.
Furthermore, European Central Bank (ECB) President Mario Draghi sent a letter to Greek banks with the recommendation to avoid further exposure to the public sector.