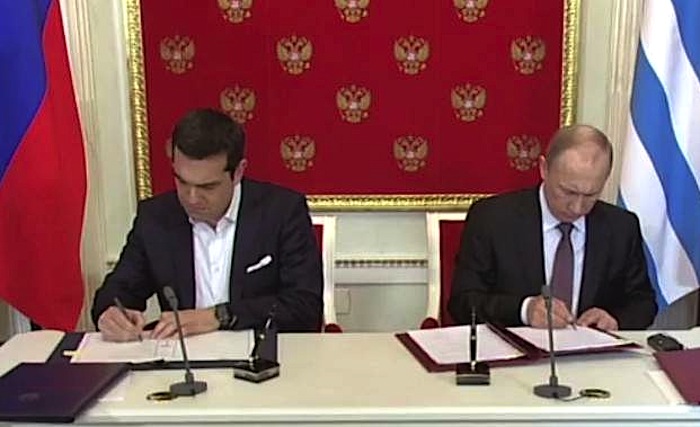 Greece and Russia signed a trade deal that will bring Greece 4.2 billion euros and talked about the renewal of the deal for natural gas supply to Greece.
After the discussions between the two delegations, Greek Prime Minister Alexis Tsipras and Russian President Vladimir Putin talked to the press. Tsipras stated that his visit to Moscow aims at the renewal of Greek-Russian relations. He said that Greece is a sovereign state and has the right to seek economic alliances wherever its interests lie and exploit its geopolitical position.
The Greek PM said the two countries will cooperate on a trade and cultural level and Russia will seek investments in tourism and infrastructure in Greece. He also called on investors to build a Greek pipeline bringing Russian natural gas to the country, thereby solving the energy problem.
On the issue of European Union sanctions imposed on Russia, Tsipras said he disagrees with the sanctions because they remind him of Cold War practices. On the issue of the Greek debt, he said that he would not go around to other countries asking them to solve a European problem that needs a European solution.
On his part, Putin stated that Greece did not ask Russia for financial aid. The trade deal the two countries signed will bring Greece 4.2 billion euros. He said he is interested in infrastructure investments, such as the Thessaloniki Port. He also said the Turkish Stream gas pipeline could make Greece an energy hub that could transport gas to central Europe.
Before the press conference, the two leaders and their delegations signed a Memorandum for “2016: Year of Greece-Russia relations,” a program of bilateral actions for 2015-2016 and a common official announcement for the 70 years since the end of World War II that will be celebrated in Moscow next month.
The Greek team of officials arrived in Moscow on Wednesday morning and after the welcome by Russian officials, Tsipras, accompanied by a Greek delegation that included World War II veterans, laid a wreath at the Tomb of the Unknown Soldier by the Kremlin Wall in downtown Moscow.
Putin welcomed the Greek PM and told reporters that the purpose of the meeting is to enhance Greek-Russian relations.
Tsipras stated that relations between the two countries have deep roots and their peoples share common traditions. He added that the aim of his visit is to restart relations for the benefit of the two peoples and that both countries should work for enhancing stability and security in the region.
Prior to the meeting, several top European officials criticized Tsipras’ move to visit Moscow at a time when crucial negotiations with creditors over the Greek debt have stalled. German Chancellor Angela Merkel and French President Francois Hollande commented that the Greek PM’s visit to Moscow is a “sideshow.”
European Parliament President Martin Schulz has warned Tsipras that his true allies are in the European Union and not in Russia, and that he should stay within the EU line in regards to sanctions against Russia.
“We expect that all member-states are treated equally and we expect as well that all member-states speak with one voice to all our trade partners, including Russia,” EU Commission spokesman Daniel Rosario said. Potential bilateral agreements to lift import bans from any state “are speculation for the moment,” he said.
Analysts warned Tsipras that he is playing a dangerous game, particularly if he truly intends to ask Russia for financial aid in exchange for refusing to abide by EU’s decision on the sanctions. On Wednesday morning, the Times wrote that “Tsipras Plays Russian Roulette on the Greek Debt.” Several analysts speculate, however, that the Greek PM’s move is aimed at the domestic audience only.
Prior to the two leaders’ meeting, Russia’s Agriculture Minister said on Tuesday that Moscow could consider removing Greece, Hungary and Cyprus from its ban on most Western food imports, imposed in retaliation for the EU sanctions over the Ukraine issue.
Also, according to Russian business newspaper Kommersant, a Russian government official said that Moscow may offer Greece a discount on natural gas and new loans.