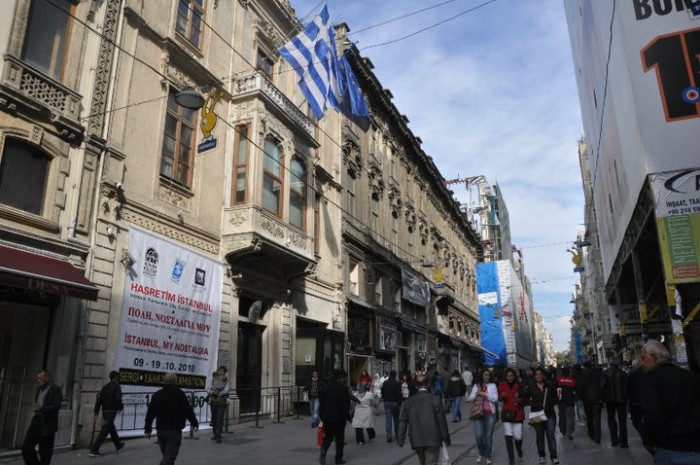 The Consulate General of Greece in Istanbul in collaboration with Columbia University’s Global Center in Turkey will host an exhibition entitled “Blue Voyagers: The Art of Romare Bearden and Bedri Rahmi Eyüboğlu” at Sismanoglio Megaro from April 15 to May 15, 2015.

This exhibition represents the final leg of a global voyage of the works of African-American artist Romare Bearden’s iconic series of works based on Homer’s “The Odyssey.” Furthermore, it will also feature works by the Turkish modernist Bedri Rahmi Eyüboğlu, who was instrumental in blending modern Western aesthetics with Anatolian themes.

The works mainly focus on the journey as a central theme, since both Bearden and Eyüboğlu envisioned a “global odyssey” as a search for a new home that used the legacies of the ancient Greek civilization as a common point of reference.

Romare Bearden (September 2, 1911 – March 12, 1988) was an American artist and writer who depicted African-American life. He has worked with many types of media including cartoons, oils and collages. He began his artistic career creating scenes of the American South. Later, he endeavored to express the humanity he felt was lacking in the world after his experience in the US Army during World War II on the European front. Bearden’s early work focused on unity and cooperation within the African-American community. After a period during the 1950s when he painted more abstractly, this theme reemerged in his collage works of the 1960s.

Bedri Rahmi Eyüboğlu (1911 – September 21, 1975) is a Turkish painter and poet who worked with mosaics, and several of his works can be found in Istanbul at hospitals or hotels. He also did a stained glass window composition at the Embassy of Turkey in Bonn, Germany. In 1960 he was invited to the United States on a Rockefeller grant and a Ford Foundation grant. He was also guest professor at the University of California, Berkeley. One of his works is part of the collection of the Modern Art museum. His work can be found in various museums in the USA, Europe and Turkey.

The exhibition is curated by Professor of English and Comparative Literature Zora Neale Hurston, and Merve Tezcanlı Ispahani. It will also be accompanied by several lectures and relevant events such as “An Invitation to the Other: Interpretation, Adaptation and Improvisation” which will be held on April 16 at the exhibition venue. Entrance is free of charge.