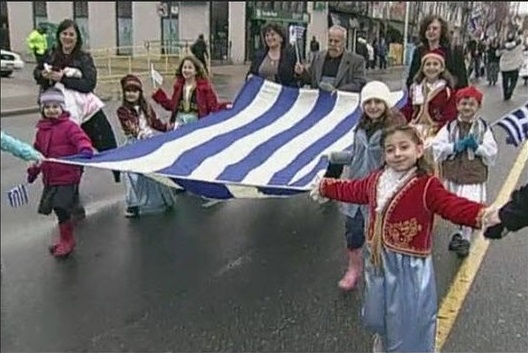 Celebrations for the Greek Independence Day on March 25 started at Our Lady of the Annunciation Parish in Montreal in the presence of Metropolitan Sotirios of Canada.

Greek-Canadian MP of the National Assembly of Quebec Gerry Sklavounos, along with Metropolitan Sotirios, several Quebec officials and Greek community members, participated in a brilliant parade that took place on Jean Talon avenue in Montreal on the occasion of the 1821 Greek Revolution. More than 3,000 spectators attended the event.

The cloudy sky did not prevent the parade of Greek schools, Greek Community associations and regional clubs holding banners.

The celebrations ended with a jointly hosted reception by the General Consul of Greece in Montreal Thanos Kafopoulos and Greek Community president Nikos Pagonis at the Greek Centre of Montreal.