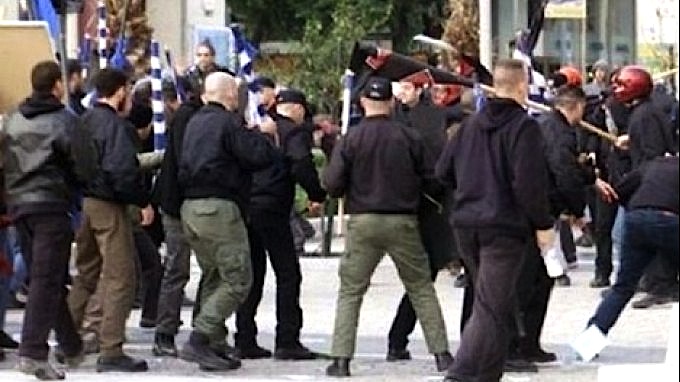 Two extreme right Golden Dawn party supporters were found guilty of bodily harm today by a court in Serres, northern Greece. The two xenophobic party supporters were tried for an attack against a leftist ANTARSYA supporter they carried out in October 2012. Both defendants received a 12-month imprisonment sentence with a 3-year suspension.

One of the defendants sentenced today was former Serres Golden Dawn MP Nikitas Siois. According to the case charges, the victim had been attacked by a group of Golden Dawners who caused him serious head injuries, while he had also been pepper sprayed by the group.

It should be noted that the Athens Council of Appeals decided, with votes 2-1, that Golden Dawn leader Nikos Michaloliakos and the party’s whole parliamentary group holding seats in Greece’s previous Parliament will stand trial, along with 54 other defendants, for forming and running a criminal organization, an offense that carries a 20-year prison sentence.

Although, the party leader and senior MPs Christos Pappas and Giannis Lagos will be released from custody on March 27, ahead of their trial tentatively scheduled for April, as the maximum 18-month period in pre-trial custody expires. A specific date for the trial has not yet been set but, according to judicial sources, it will take place after the April 12 Greek Orthodox Easter. Michaloliakos and Pappas will remain under house arrest as they face additional charges of gun possession.