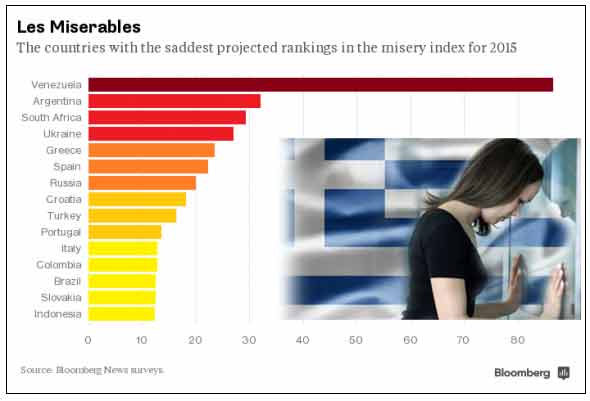 Inflation is a disease that can wreck a society, Milton Friedman, the late Nobel laureate economist, once said. Add rising unemployment to the diagnosis, and his profession ascribes a rather non-technical term to the debilitating effect on people: misery.
That affliction this year will be most acute in Venezuela, Argentina, South Africa, Ukraine and Greece — the five most painful economies in which to live and work, according to Bloomberg survey data that make up the so-called misery index for 2015. (It’s a simple equation: unemployment rate + change in the consumer price index = misery.)
Five years after investors popularized the term “PIIGS” to describe a handful of European countries with bloated budget deficits, four of those five countries remain in dire straits, according to their projected misery indexes.
Greece is 5th, Spain is 6th, Portugal is 10th and Italy is 11th in this year’s ranking, though each show about average projected income levels relative to survey peers. (Ireland happily sits further down the chain at No. 16 in the misery ranking and with a much-better-than-average GDP per capita of $48,787. The 51 economies in our misery index average GDP per capita of $31,079.)
Enough of the sad news. For the glass-half-full take, stay tuned for our take on the most consumer-friendly economies in 2015.
(source: Bloomberg)