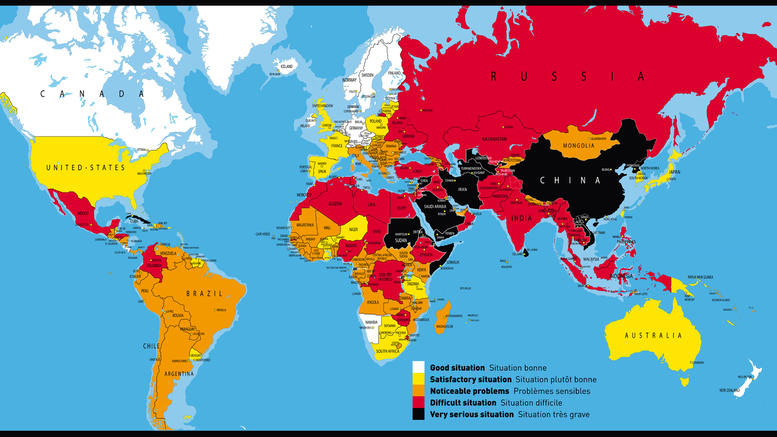 Greece ranked 91st in the annual Reporters Without Borders World Press Freedom Index 2015, which is a step up compared to last year when the country was ranked in 99th place. The World Press Freedom Index ranks the performance of 180 countries according to a range of criteria that include media pluralism and independence, respect for the safety and freedom of journalists, and the legislative, institutional and infrastructural environment in which media operate.
According to the report, between 2009 and 2014, Greece fell 56 places on the list, receiving the second lowest ranking in the European Union, while Bulgaria is last in 106th place.
The reasons behind Greece’s low ranking are “Police violence against journalists during protests has above all been to blame. Several trials and investigations into cases of violence against journalists, including Manolis Kypraios and Marios Lolos, ended in 2014 without any police officers being held to account, reinforcing the prevailing impunity. The climate of violence has also been boosted by attacks on journalists by Golden Dawn members, without any appropriate measures being taken by the government to protect media personnel. At the same time, the economic crisis has had a grave impact on pluralism in both state and privately owned media,” according to Reporters Without Borders.
The top 10 countries are Finland, Norway, Denmark, Netherlands, Sweden, New Zealand, Austria, Canada, Jamaica and Estonia. Cyprus was ranked in 24th place, while the occupied area of Cyprus (presented as “Northern Cyprus”) was place 76th. Turkey was placed very low (149th place) and FYROM (presented as “Macedonia”) was placed 117th.
Syria, Turkmenistan, North Korea and Eritrea were placed last on the Index.