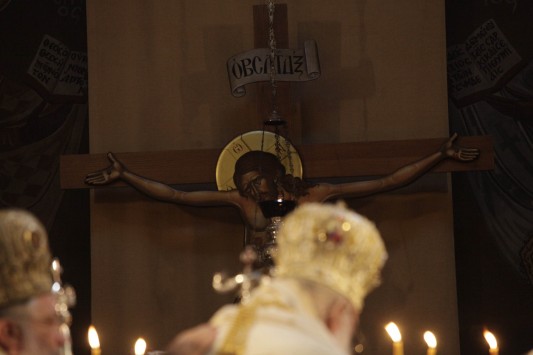 A peculiar incident has drawn attention to the small village of Aspokambos in Corinth Greece, over the last few days.
According to Metropolitan Dionysios of Corinth, after the national election of January 25, an oily, sticky, odorless liquid started seeping from an icon depicting Jesus Christ crucified, however, details regarding which point of the icon the liquid is emerging from has not been disclosed The religious icon was created in the last century and it is located in the Greek Orthodox Church of Saint Nikolaos.
The metropolitan of Corinth added that he was planning on informing the Holy Synod about the incident while he also intends to invite specialists to examine the icon.
Meanwhile, village residents are standing outside the church, guarding it, refusing to let the crucified Christ icon be removed from the holy grounds. That of course makes it difficult to be examined, especially considering that they are also refusing to let scientists take samples from the liquid to send for analysis.
Moreover, metropolitan Dionysios stated that he does not wish to “advertize” the incident until the church has more information on its hands, since the matters of faith are delicate and people should be careful about how to approach them.