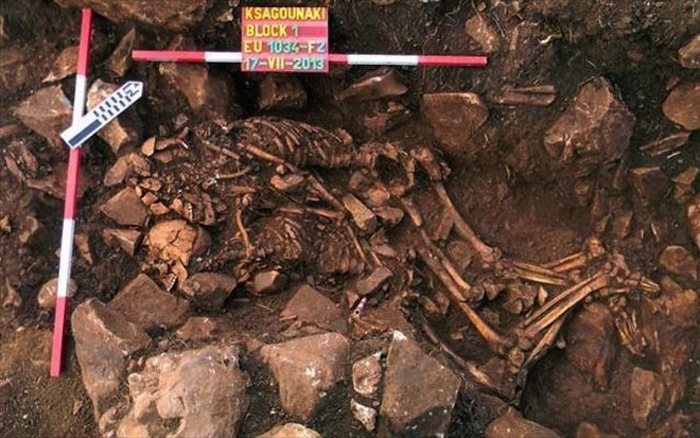 A rare Neolithic-era find of the skeletons of a couple embracing was found in excavations by the northern entrance of the Alepotrypa (“Foxhole”) Cave in southern Greece, the Archaeological Service announced on Thursday.
The undisturbed burial was found close to a burial of another male and female who were found in fetal position. The burials also contained broken arrowheads.
The embracing couple’s skeletons were dated with the C14 method to 3800 BC while their DNA analysis confirmed the remains were those of a male and female.
Both burials are part of a Neolithic cemetery in the greater area of the Neolithic Diros Cave, in western Mani, where excavations have yielded children’s, embryos’ and adults’ burials dated from 4200 to 3800 BC. According to most recent data and analyses, the cave appears to have been in use from Early to Final Neolithic (6000-3200 BC) and served throughout as settlement and cemetery.
At the end of the Final Neolithic (3200 BC), a severe earthquake sealed the entrance of the cave and the remains of its inhabitants inside. Excavations began after an accidental discovery by speleologists Yiannis and Anna Petrocheilos in 1958.
Excavations in the area were continued in 2014 under the honorary ephor of antiquities George Papathanassopoulos heading a committee of the Paleoanthropology Ephorate of Antiquities and the Speleological Society of Northern Greece, as well as Greek and foreign specialists. The committee is responsible for publishing the final results.
Commenting on the finds, Dr. Papathanassopoulos told ANA-MPA that he stopped the use of the cave area as a tourist attraction in the late sixties to start excavations in it in 1970 and created a small museum showing some of the very abundant finds.
The two burials are in excellent condition, he said. “The type of burial in fetal position is common in the Neolithic era, but the specific double burial in embrace is one of the earliest known examples. At some point, they will be exhibited in the museum following its extension,” he explained.
(source: ana-mpa)