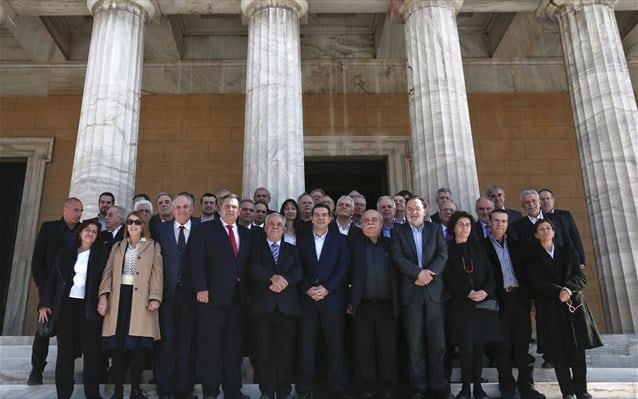 The first political moves and acts of the new Greek coalition government have shocked German officials, according to a Reuters report.
On his first day as prime minister on Monday, Alexis Tsipras placed a wreath at the war memorial in Kaisariani where 200 Greek resistance fighters were executed by the Nazis in 1944.
Hours later, Tsipras received the Russian ambassador before meeting any other foreign official. Then came his criticism of a European Union statement warning Moscow of new sanctions.
A day later, radical academic Yanis Varoufakis, who once likened German austerity policies to “fiscal waterboarding,” was sworn in as Greece’s finance minister.
After the first cabinet meeting, respective ministers announced the rehiring of all public sector employees who were laid off, the stop to privatization of Piraeus Port Authority and the Public Power Corporation, a raise on minimum wage and pensions. All the above are measures that were agreed on by the previous government as part of Greece’s bailout program.
What was considered to be campaign talk, is now becoming a reality that has “stunned” German officials. The radical changes Tsipras has promised to the Greek people seem to be on track.
According to Reuters, Germany‘s economy minister and deputy chancellor Sigmar Gabriel criticized Athens on Wednesday for halting the privatizations without consulting, and he issued a warning to Tsipras that the euro zone could survive without Greece.
Marcel Fratzscher, head of the DIW economic institute in Berlin and a former official at the European Central Bank, said Tsipras was playing a “very dangerous game” by being provocative.
“If people start to believe that he is really serious, you could have massive capital flight and a bank run,” Fratzscher said. “You are quickly at a point where a euro exit becomes more possible.”
Another issue of concern to Germany is Greece’s stance towards sanctions on Russia. The new Greek leader protested against the EU statement on the Ukrainian crisis, shaking the fragile consensus towards Moscow. German officials worry that other countries can follow suit on the sanctions issue. Italy, Slovakia and Hungary are countries that could band together against the extension of the sanctions.
According to the report, “stealing” Tsipras away from his European partners on the Ukraine issue would be a victory for Vladimir Putin. Some officials fear the Russian president could go so far as to offer Greece the financial support it needs to meet its debt obligations as a carrot.
One senior German official who preferred to remain anonymous described Tsipras as part of an impetuous new generation of European leaders, including Italy’s Matteo Renzi, who weren’t afraid to stand up to German Chancellor Angela Merkel and challenge the assumptions that have shaped policy in the euro zone and the Ukraine crisis in recent years.
“He doesn’t come from the establishment, he’s unvarnished, confident and capable of rallying the public behind his course,” the official said. “It is clearly not going to be easy with him.”

The first Orthodox Church in the US was established in New Orleans in 1864, built in 1866, by Greek merchants.
Diaspora

Nick and Mary Mathews, who emigrated to the US and found prosperity there are symbols of the bond between Greece and the U.S.