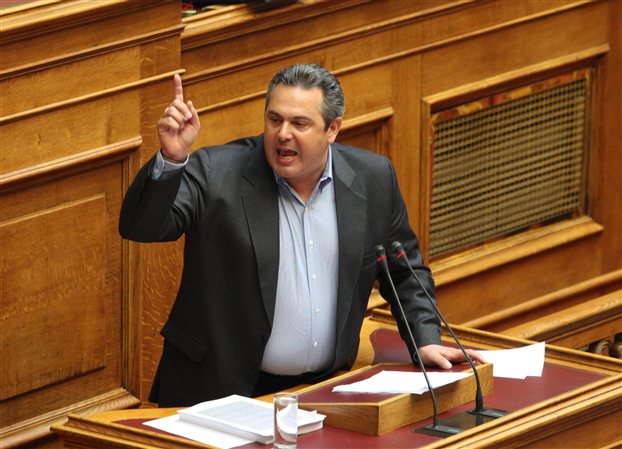 When Alexis Tsipras had announced that SYRIZA may cooperate with the Independent Greeks (ANEL) after the elections, most analysts and voters were perplexed. How could the radical leftists collaborate with the patriotic, church-loving, anti-immigration party led by former New Democracy MP Panos Kammenos? In fact, in December, when the two men met to discuss the possibility of a collaboration, Tsipras had stated that there is a “cultural abyss between SYRIZA and ANEL.”
Indeed, Kammenos has served the New Democracy conservatives for almost 20 years before being ousted in 2012 for refusing to vote in favor of the Memorandum signed with Greece’s lenders. Then he went to form the center-right ANEL. His views remained conservative, pro-Greece and pro-Church, but his opposition to the austerity measures required by the country’s bailout program, brought him against the New Democracy-PASOK coalition that heeded the dictates of the Troika of international lenders. His anti-Troika stance created the common ground needed for forming an alliance with Tsipras’ leftists. Now ANEL is the junior partner in the Greek coalition government.
Kammenos was born in May 1965, studied economics and psychology at the University of Lyon, and Business Administration and Management in Switzerland. In 1993, he was first elected as a New Democracy MP running in the Athens Second District. He was elected ever since, until he formed his own party in 2012.
He has received several honors such as the Grand Cross of Merit from the Czech Patriarchate, the Medal of Honor from the Patriarchate of Jerusalem and the Medal of Knight from the National Order of Merit by French President Nicolas Sarkozy. In 2007, he was appointed Deputy Minister of Mercantile Marine, Aegean and Island Policy in the Costas Karamanlis administration. He is married to lawyer Eleni Tzouli and has five children.