GRNews
GreekReporter.comGreeceGreek PM Samaras: SYRIZA an Accident that Must Not Happen

Greek PM Samaras: SYRIZA an Accident that Must Not Happen 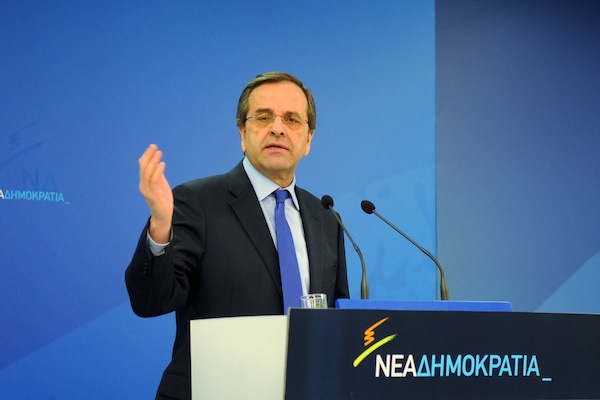 Greece’s Prime Minister, Antonis Samaras, during a campaign speech in western Greece on January 12, expressed his optimism that Greek people will fight against populism and will not vote for the main opposition party SYRIZA.  He characterized the leftist opposition party as an “accident” that must not happen to Greece.
Addressing the people of Ioannina, in Epirus, Mr. Samaras attacked SYRIZA once again, highlighting its senior officials conflicting views and the party’s indecisiveness over its stance regarding the European Union. Furthermore, in a controversial attempt of polarization Mr. Samaras accused SYRIZA for a policy program which is “favoring granting citizenship to illegals.”
“Party officials have informed us that their main weapon is suspension of payments: in other words, bankruptcy – a great negotiating tactic! Another announced Greece’s immediate exit from NATO and a third one asked for a referendum. You cannot ask Europe for money and not follow its practices,” the Greek Premier said.
Referring to his recent participation in the Paris solidarity march, he underlined that this was organized in support of a secure and safe Europe, above and beyond religions, “a Europe that is thinking again about issues of respect of principles and values which everyone must respect. In this Europe, those who want to open borders and grant citizenship to any illegal, instead of controlling them, are like flies in the ointment.” Raising the tone he continued: “SYRIZA will want jails without bars, courts without prosecutors. A government must protect its citizens, their right to circulate freely, and on Sunday in Paris they shouted loud and clear ‘We are not afraid.’ What planet does SYRIZA live on, doesn’t it see what is happening in the rest of the world? SYRIZA is an accident that must not happen.”
Concluding, Mr. Samaras repeated that Greece is now very close to “breaking up the past of populism and statism,” while regards the upcoming general elections of January 25 he said that the country is “very near to the best and very near to the worst” and “every single vote counts.”