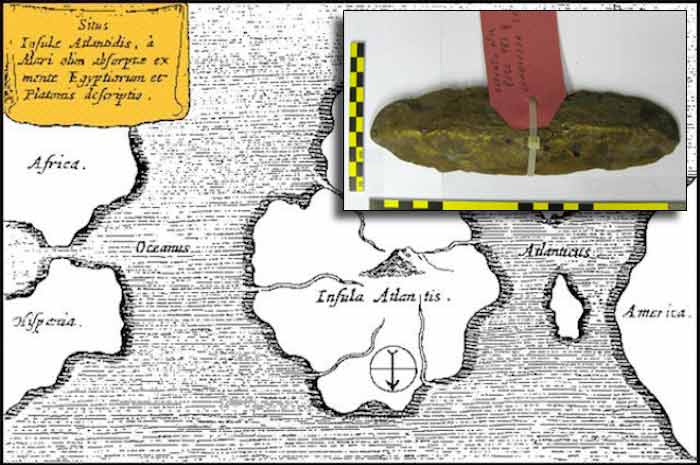 A team of divers have discovered dozens of pieces of ancient metals from a shipwreck, aged 2,600 years, off the coast of Sicily island, in the south of Italy. According to “Archaeology Magazine,” the wreck belongs to a Greek ship, which carried ingots of a rare metal that Plato thought was mined in Atlantis.

“The wreck dates to the first half of the sixth century. It was found about 1,000 feet from Gela’s coast at a depth of 10 feet,” Sebastiano Tusa, superintendent of Sicily’s sea office, told Discovery News. What the researchers have to do next is to identify the type of metals the divers discovered in the wreck. The divers say that the 39 pieces of metal are orihalcum, an element referred to in Ancient Greek mythology, which was also mentioned by the iconic Greek philosopher in his in his dialogue Critias.

Plato, in his Dialogue has given a precise description of the mythical island of Atlantis, which was also the home to the temple of the Ancient Greek god of the sea, earthquakes and horses, Poseidon.

“Here was Poseidon’s own temple which was a stadium in length, and half a stadium in width, and of a proportionate height, having a strange barbaric appearance. All the outside of the temple, with the exception of the pinnacles, they covered with silver, and the pinnacles with gold. In the interior of the temple the roof was of ivory, curiously wrought everywhere with gold, silver and orichalcum; and all the other parts, the walls and pillars and floor, they coated with orichalcum,” Plato wrote.

Although, the actual composition and origin of the orichalcum remains unknown until today, most scholars agree that it is a brass-like alloy made by combining zinc ore, charcoal and copper metal, as Discovery News reported. “Nothing similar has ever been found,” Mr. Tusa said, adding that the only sources referring to the mysterious metal are ancient texts and ornaments. The superintendent of Sicily’s sea office highlighted that he is sure that the recovery of the ancient shipwreck will lead historians and scientists to useful clues. “It will provide us with precious information on Sicily’s most ancient economic history,” he concluded.