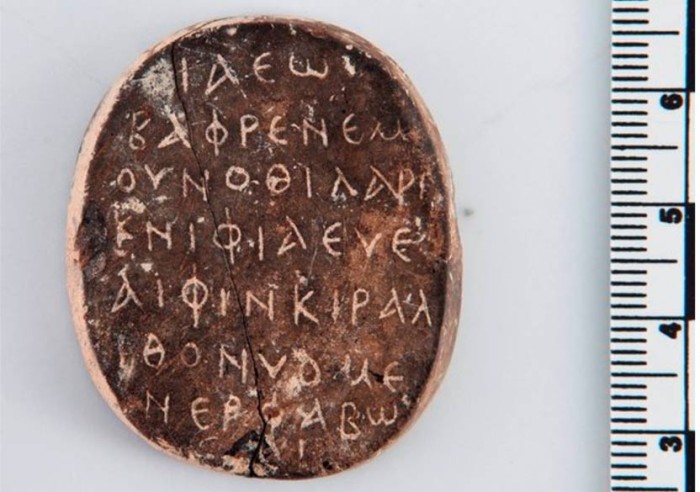 Archaeologists in Nea Paphos, Cyprus have unearthed a 1,500-year-old amulet depicting a palindrome inscription written in ancient Greek. Palindromes are phrases that are read the same both forward and backwards. On its other side, the amulet features images of the ancient Egyptian god Osiris, a cynocephalus and the god of silence, Harpocrates.
According to Live Science, the artifact was found in the ancient agora of Nea Paphos, where archaeologists have been working for a long time. The agora used to operate as a gathering place for the worship of the ancient goddess, Aphrodite.
“Paphos, which has been inhabited since the Neolithic period, was a center of the cult of Aphrodite and of pre-Hellenic fertility deities. Aphrodite’s legendary birthplace was on the island of Cyprus, where her temple was erected by the Myceneans in the 12th century BC and continued to be used until the Roman period,” noted UNESCO.
The amulet inscription reads: “ΙΑΕW ΒΑΦΡΕΝΕΜ ΟΥΝΟΘΙΛΑΡΙ ΚΝΙΦΙΑΕΥΕ ΑΙΦΙΝΚΙΡΑΛ ΙΘΟΝΥΟΜΕ ΝΕΡΦΑΒW ΕΑΙ,” which roughly translates to “Iahweh is the bearer of the secret name, the lion of Re secure in his shrine.”
On its other side the amulet features several images, such as a mummy lying on a boat which is thought to be a representation of Osiris, the ancient Egyptian god of the underworld, a cynocephalus, a mythical creature with the head of a dog and the body of a man and Harpocrates, the ancient god of silence, sitting on a stool with his right hand on his lips.

Greek shipowner Ioannis Angelicoussis died on Saturday at a central Athens hospital, where he was being treated after a heart attack.
Australia