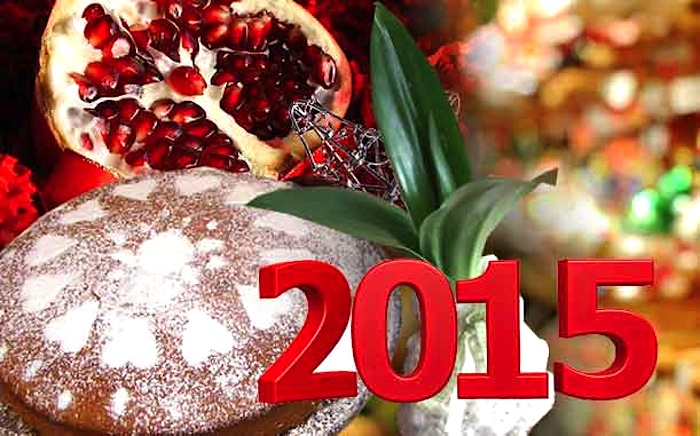 New Year’s celebrations in Greece include some customs and superstitions that may seem strange, but they go back ages. The big difference in celebrations between Greece and other countries is that New Year’s Day is also a Christian holiday, and specifically Saint Vasilios day.
Saint Vasilios is the Greek version of Santa Claus. And while the internationally known Santa delivers his presents on Christmas Eve, Saint Vasilios waits a few days and puts the presents under the Christmas tree on New Year’s Day.
Hence the Vasilios cake, or vasilopita in Greek: a sweet, round cake in which the head of the family ceremoniously cuts at the turn of the year. Each piece is designated to members of the family and the first three pieces are offered in order to Jesus, the Virgin Mary and Saint Vasilios, while the fourth piece goes to the family home. The rest goes to family members in order of age. Inside the cake there is a hidden coin, which is often a token of value, that will go to the lucky person who gets that piece. In some parts of Greece, the vasilopita is cut at the family table in the afternoon of January 1st.
New Year’s Eve is also a day when Greeks try their luck. They believe that if they win playing cards or the lottery, they will have good luck all year long. Lotteries and card games at home or in clubs and coffee shops are ongoing when the year turns.
On New Year’s Day, who is going to enter your home first is often considered a sign of luck. It is called podariko. You usually choose who to invite first, depending if you consider him or her a lucky person And if you are invited, you have to enter the house with the right foot first. Usually, Greeks want children to enter their home first, since children are pure of heart and innocent. Many Greeks invite nephews, nieces and grandchildren and they give them the “good hand,” which can be money, toys or sweets.
In the Cyclades islands, it is considered a good omen to have north winds on New Year’s Day. If a dove lands in the yard that day, it brings good luck. But if a crow flies over a house, then it is a bad omen for the new year.
The wild onion that grows on the island of Crete looks like a big onion. It is poisonous and causes skin rash. If you uproot it, it will still grow new leaves and flowers. For the people of Crete, this rare quality signifies great natural power and they hang wild onions in their homes on New Year’s Day.
The pomegranate is a symbol of abundance, fertility and good luck. In many areas of Greece they hang a pomegranate in their home in autumn. After the New Year’s Eve church service, they smash the pomegranate at the door while wishing “Happy New Year!”