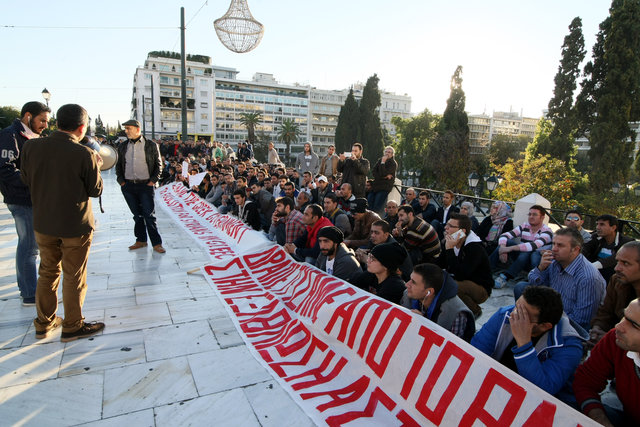 The Greek government’s will to find a solution over the 200 Syrian refugees who have been in a sitting protest for the 13th consecutive day in Syntagma square, opposite the Parliament in downtown Athens, and have gone on a hunger strike – except the children – for a week, expressed yesterday the Secretary General of Population and Social Cohesion of the Interior Ministry, Angelos Syrigos, adding that their presence at the square cannot be continued.

Speaking at a press conference, Syrigos explained that granting them a political asylum is the only legal and possible solution. He said that this is a possibility that will provide them the right to travel to other European Union countries, but not permanently reside and work there. Talking to Greek newspaper “Kathimerini,” Syrigos revealed that the Greek government is also willing to ask for northern European countries to grant asylum to the 200 Syrian refugees, although he underlined that it does not expect to get a positive response in this request.

“There is no intention from the north countries to take these people. We will raise the issue but we should expect a stern response. It is almost certain our request will be turned down,” he said to the Greek newspaper. In a meeting with the refugees, Syrigos urged them to apply for asylum in Greece but they appeared reluctant, as this could block their way to other European countries, which were their destination in the first place. “Taking into account the situation they found themselves in, we have told them that they have to make a decision soon. We did not ask them to leave now but we made clear that this situation cannot continue for many more days,” Syrigos highlighted.

On their behalf, the Syrian refugees asked to be granted travel documents in order to travel to their destination countries and apply for political asylum there.