GRNews
GreekReporter.comGreek NewsEconomyGreek FinMin: We are Working to Avoid Return to Uncertainty

Greek FinMin: We are Working to Avoid Return to Uncertainty 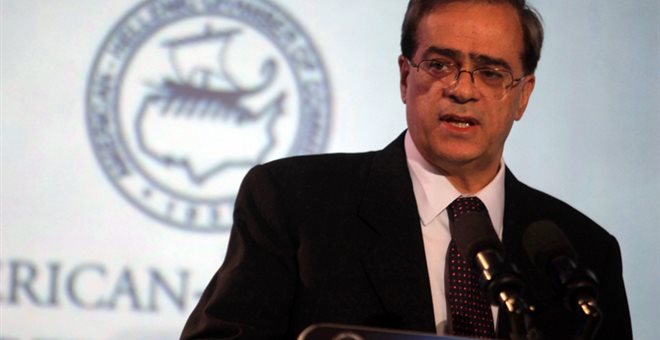 His estimation that significant progress has been made in the ongoing talks between Troika’s representatives and the Greek government, expressed earlier today Finance Minister Gikas Hardouvelis, during his speech at the Greek Economic Conference organized by the American-Hellenic Chamber of Commerce in Athens.

Furthermore, the Minister highlighted that the Greek economy is finally stabilized and returning to growth. In an attempt to link the situation of the Greek economy with the political agenda, Hardouvelis expressed his firm belief that the growth rate could literally take off after the election of the new President of the Hellenic Republic this coming February. Restoring the Greek economy’s competitiveness, he said, is a primary aim and a new model for growth that is not based on domestic consumption but on an export-oriented economy focused on extrovert sectors with potential for growth, such as tourism, energy, pharmaceuticals, research, technology, as well as shipping.

Regarding the banking system, Hardouvelis stressed that, after the successful evaluation from stress tests, the Greek banks should now focus on their main mission, which is to finance the real economy. Finally, referring to the reforms agreed with the country’s creditors, the Greek Minister said that most of them have already been carried out and that everyone should now put emphasis on political stability and continuation of the reforms in order to complete the desired exit from the recession.