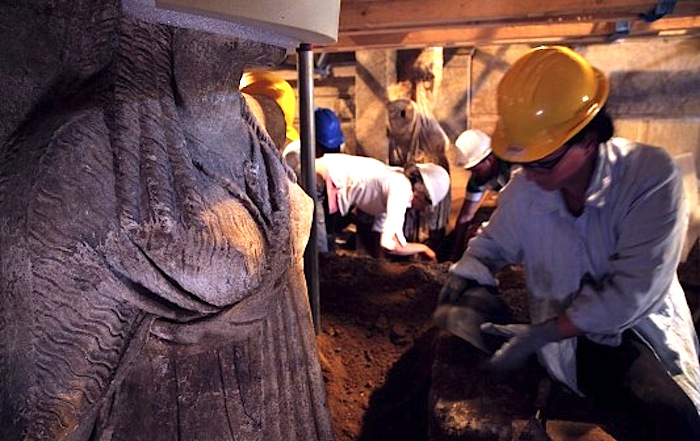 The human representations on the epistyle of the Amphipolis tomb found today, prompted Culture Minister Contanstinos Tasoulas to speak of “an unparalleled burial monument,” that has “the whole world in awe.”
The Greek minister visited the Casta hill excavation site today to see the new findings and to be briefed on the progress of the project. A press conference followed the minister’s briefing, where Mr. Tasoulas said that “Amphipolis is an exercise in wonderment and patience.”
In his official visit to the site, the culture minister was accompanied by head of excavation project Katerina Peristeri, General Secretary of Culture Lina Mendoni, Amfipolis tomb Press manager Anna Panagiotarea and Substitute Interior Minister Theofilos Leontaridis.
Mr. Tasoulas said that the main priority now is to preserve what has been found so far and continue with the geophysical survey of the tomb area.
Meanwhile, the archaeologists’ crew is continuing excavations on the hill in order to discover more structures and objects. The human representations on the epistyle of the third chamber will be cleaned first and then they will be studied using laser techniques.
The culture minister said that people in Greece and around the world should be patient because the cleaning and the study of the findings is a laborious and time-consuming process that requires patience. He said that the project has now entered the scientific stage, where the findings will be studied in laboratories and experts will determine their origin and importance. Archaeologists, geologists, historians, and other scientists will work in unison on the project that the Greek official estimated will take up to five years to be completed.