GRNews
GreekReporter.comGreek NewsEconomyFinMin Hardouvelis: Greece Will Have a Safe Agreement with Creditors

FinMin Hardouvelis: Greece Will Have a Safe Agreement with Creditors 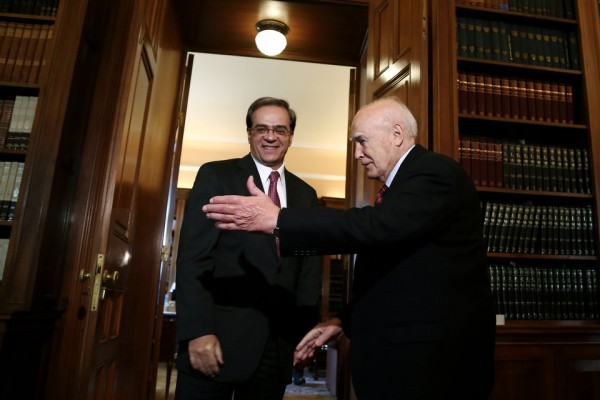 His confidence that the country will achieve a “safe” agreement with its lenders if it remains calm, expressed Greek Finance Minister Gikas Hardouvelis during a meeting with President of the Hellenic Republic Karolos Papoulias.

“In the final straight for the agreement concerning the ‘day after,’ we are conscious of the responsibility. Our negotiation will be tough, honest and effective. We want an agreement that will move the country forward and we will achieve this,” the Greek Minister underlined, exiting the hour-long meeting held in the Presidential Mansion in Athens. Speaking to reporters, Hardouvelis said that he had briefed the President on the progress of the ongoing negotiations with the country’s lenders, as well as the situation in the Greek economy. “There is no point to the bluster, which is usually for the benefit of public opinion at home. This country has been paying for this kind of behavior for years now and always after the fact. We must reach to an agreement with the creditors that is safe for the country and we will make it,” he declared.

Regarding his role, the Greek Finance Minister said that it is among his duties to defend the country’s fiscal stability, highlighting that as far as it is up to him, he will not allow the Greek people to be misled while he is working for a realistic agreement with the Troika. Answering to questions regarding scenarios on his responsibilities, Hardouvelis referred to attempts – of certain circles – to make the situation more complicated and “muddy the waters,” as he characteristically said. “The Prime Minister is well aware of what has happened, as is the government Vice President, and that is enough for me. I remain dedicated to my work, which is the safe transition of the Greek economy and the country to the phase of growth,” he added.

Furthermore, Hardouvelis insisted to the government’s communication policy declaring that the country’s economy is already stabilizing and returning to positive growth levels, whereas referring to the “day after” and the relation between Greece and its lenders, he said that it will be friendly. “We will keep Greece within the European family, we will continue the structural reforms, reinforce the institutions, organize the state and constantly raise the living standard of all Greeks,” he said, concluding that the above will be easier achieved in a climate of support from the European partners.