PM Samaras: Greece's Return to Growth Is a Fact 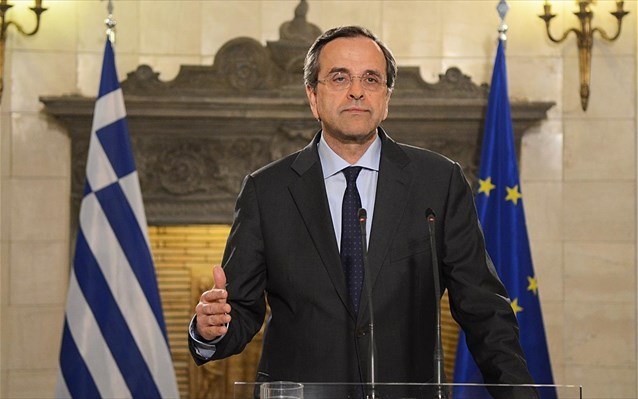 The Hellenic Statistical Authority (ELSTAT) announced earlier today that Greece’s GDP growth rate for the third quarter of 2014 stands at 1.7% and Prime Minister Antonis Samaras made an official statement on the matter. The Greek Premier underlined that the country’s return to growth, as promised, is now a reality, signaling that “Greece is back,” as he said at the end of his triumphal televised statement.
“We promised you that the country would exit the tunnel of the great recession. This is now a reality. The return of the Greek economy to growth is a fact. Based on the latest ELSTAT figures, the recovery has already begun for the Greek economy. And, indeed, at a greater rate than even the most optimistic had expected.
Truly, in the third quarter of this year, the economy grew at an annual rate of 1.7%, after six painful years, or 24 trimesters, of recession. It is the fastest growth rate for this trimester for the entire Eurozone. And as is now revealed, the year’s previous trimester was also slightly upward,” Samaras highlighted.
During his speech, the Greek Prime Minister did not miss to refer to all those “who doubted a recovery, are triumphantly proved wrong,” pointing at the main opposition party SYRIZA.
“I promise you today, that the recovery will continue at an even faster pace. This, in any case, is what all international organizations are forecasting. And from the growth that has begun, no Greek will be left behind. In spite of the pessimism on which many were speculating, Greece is returning. Greece is back,” Samaras concluded.
Analyzing what the figures might mean for the country’s next day, Diego Iscaro, senior economist of IHS Global Insight, told Reuters that “the figures will certainly help to beat the fiscal and debt targets for this year, although they don’t significantly change the picture for long-term debt sustainability.”