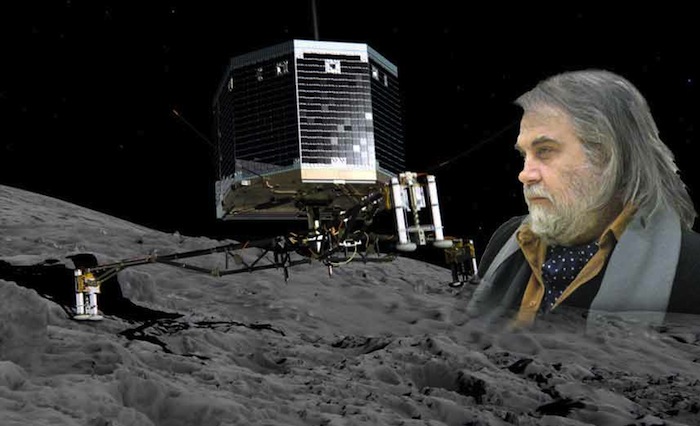 Oscar-winning Greek composer Vangelis (Papathanasiou) has been commissioned to write three musical numbers for the Rosetta ESA mission.
The European Space Agency made history yesterday by landing the first spacecraft on the surface of a comet. The Philae spacecraft landed twice on Comet 67P/Churyumov-Gerasimenko.
The confirmation was relayed via the Rosetta orbiter to Earth and picked up simultaneously by ESA’s ground station in Malarguee, Argentina and NASA’s station in Madrid, Spain. The signal was immediately confirmed at ESA’s Space Operations Centre, ESOC, in Darmstadt, and DLR’s Lander Control Centre in Cologne, both in Germany, according to NASA.
The ambitious space mission will now have its own cinematic soundtrack. The ESA commissioned Vangelis to compose three pieces for Rosetta, concluding with “Rosetta’s Waltz” which has just been released.
Vangelis is not new to composing space themes as in 2001 he had released the album “Mythodea: Music for the NASA mission: 2001 Mars Odyssey.” Inspired by the NASA mission to Mars, the album and the DVD of the concert at the Temple of Olympian Zeus site in June 2001 had a promotional tie-in with NASA.
ESA has quoted him as saying, “Mythology, science and space exploration are subjects that have fascinated me since my early childhood. And they were always connected somehow with the music I write.”
The Greek composer won the Oscar for Best Music for “Chariots of Fire” in 1981. A year later, he wrote the score to 1982 sci-fi epic “Blade Runner” that was nominated for BAFTA. Other soundtracks by Vangelis are Antarctica, 1492: Conquest of Paradise, Alexander, and the PBS documentary Cosmos: A Personal Voyage by Carl Sagan. He also wrote the music for the 2000 Sydney Olympic Games.
Watch “Rosetta’s Waltz” here: